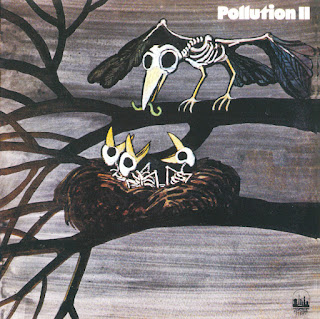 Pollution was the brainchild of guitarist and songwriter James Quill Smith (aka Smitty), who appears to have organized the band and wrote a good deal of the songs they recorded. With most of the rest of their material written by other members of the group.
Tha band released three albums, the 1969 "Heir: Pollution" for Capitol records, and two more simply named "Pollution I" and Pollution II" 1971 and 1972 for Prophesy Records. Their manager was Max Baer Jr., son of the onetime World Heavyweight champion and the actor who played Jethro on the Beverly Hillbillies. This didn't appear to help their career as much as one might expect since, by all accounts, he was a lousy manager. He did better as a movie producer having put out some profitable gems like Macon County Line & Ode to Billie Joe.
Prophesy Records, which issued both of these albumes, was distributed by Atlantic that only had a few releases including a couple Kraut rock bands, a Clifton Chenier album & Quincy Jones' soundtrack for The Hot Rock–odd selection to say the least. Interestingly, Pollution I won a Grammy for it's cover (done by Gene Brownell). It's a good cover but I like the one for Pollution II better. On the other hand, I prefer the music on the 1st one. The music on both releases is soul-inspired rock with horns and occassional nods to country rock.
After Pollution disbanded, James Quill Smith became a member of  Three Dog Night in 1974 after Joe Schermie and Michael Allsup left to form S.S. Fools. He left them in 1975 and was replaced by Al Ciner. Turning to the big screen he appeared in the 1992 movie A Private Matter that starred Aidan Quinn and Sissy Spacek.
Very active in the music industry, he performed with artists such as Dr, John, Billy Joel, Roger McGuinn and Sylvester & The Hot Band to name a few and was the guitarist in John Mayall’s Bluesbreakers from 1977 appearing on many of his album releases from that time onwards. In 1999 he released Down to Earth with his James Quill Smith Band.
He suffered a stroke in 2007 which ended his career and he passed away in Lawrenceville, Georgia in 2018 when he was 74 years old. 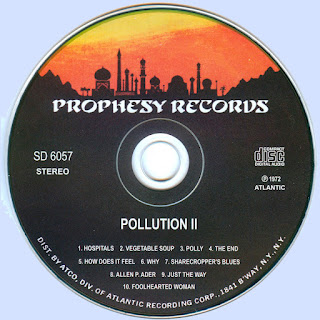