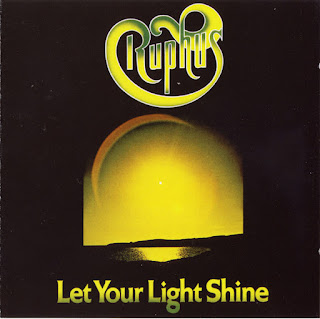 With their third album, Ruphus turned to Terje Rypdal as producer, and the result sees a decided turn away from the symphonic rock of Ransahrt towards jazz-rock. Original singer Gudny Aspaas is back on board, this time as the sole vocalist, but aside from the departure of singer Rune Ostdahl the rest of the band remains intact: Asle Milsen (bass), Thor Bendiksen (drums), Kjell Larsen (guitar), and Hakon Graf (keyboards). Rypdal provides some added synthesizer on a couple of tracks, but the famous producer lets the band shine on their own.
They get off to a great start with “Sha Ba Wah,” a high-energy fusion tune with Aspaas providing a wordless melody and sounding oddly like what might have happened if Annie Haslam had guested with a jazz group. “Corner” is a keyboard-dominated piece with an easy groove reminiscent of something Camel might have done around Moonmadness. This slides into “Second Corner,” a great jazz-rock tune a little like Colosseum II with slightly less flashy soloing. Bendiksen’s drumming is outstanding here, frantically busy with great interplay between cymbals and snare. I’m amazed that he has so few credits outside Ruphus, given the skills he shows here.
The title track, which originally started Side B of the LP, is the first track with lyrics. Aspaas does great with the contrasts between the verses, which are relatively quiet and breathy, and the chorus, where she gets to belt out the notes. Quite often I find vocals in this kind of jazz to just not work very well, but Ruphus manages to do it right, and it’s actually disappointing that Aspaas appears on only three of the seven tracks. Let Your Light Shine strikes a very appealing balance between funky jazz and accessible rock.
by Jon Davis, 2020-07-23 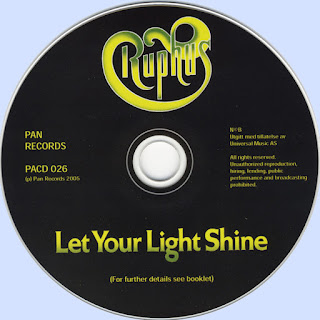