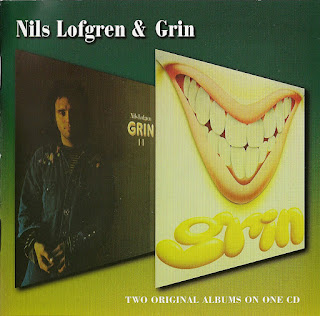 1+1 was the second album from Grin, an LA based band fronted by Nils Lofgren (who originally hailed from Washington, DC). This lp followed their rock solid, self-titled debut album from 1971. 1+1 sounded stronger, more confident and clearly displayed Lofgren’s talent as a musician and songwriter.

Lofgren had always believed in straight ahead rock n roll though some of the songs on this lp veer towards roots rock and orchestrated pop rock. The first side of the original lp featured mid tempo rockers while side 2 was devoted to Emitt Rhodes/Paul McCartney-like ballads. It was yet another hard luck record from the era, and even though 1+1 had many shining moments, it still did not sell well. White Lies opened 1+1 on a firey note with sharp Lofgren vocals, Moody Blues-like harmonies and sparkling rustic accoustic guitars. The first half of this lp is really a record for classic rock fanatics and will surely appeal to fans of Todd Rundgren and Crazy Horse. Moon Tears, End Unkind and Please Don’t Hide are ballsy, hard hitting and tasteful, making it hard to believe that Lofgren is known for who he has played with (Bruce Springsteen and Neil Young) rather than that of his own music.

Most of the rock n roll heard on this record is much stronger than what you would hear on your local classic rock radio station. For pop obsessives side 2 had some lost gems. Hi, Hello Home has some pretty banjo and is a folk-rocker that strongly recalled the Buffalo Springfield classic A Child’s Claim to Fame. Other tracks such as Just A Poem, Sometimes and the excellent harpsichord/strings ballad Soft Fun have a lost romanticism that really penetrates the soul.

There are no weak moments on this lp and as solid as it is, Lost a Number is the one track that exists outside the box. It’s a timeless classic, a heartbreaking piece of lost love with beautiful accordian playing and a catchy melody. In a perfect world, had this wonderful power pop song been released as a single, it would have been a hit record. Lofgren went on to release a few more records with Grin and some fine critically acclaimed solo works throughout the 1970’s.
by Jason Nardelli

1+1 was recorded in an independent studio called Wally Heider’s in Los Angeles. “As the thing took shape, we realized that the batch of songs that we had were almost half and half — gentler and hard,” recalled Lofgren. “I don’t remember whose idea it was, but we all started batting around, ‘Well why don’t we just use it as a strength?’” The decision was made to have all the soft songs on one side and the up-tempo numbers on the other. This process also gave the new album its title: 1+1. “It was just a function of the Rockin’ Side and the Dreamy Side,” Lofgren said.

The cherry on the album’s icing is Briggs’ fabulous wide-screen production technique. 1+1 is described by the New Musical Express Encyclopedia Of Rockas “one of the lost classics of rock” because criminally, it failed to sell. “White Lies,” which opens the Rockin’ Side, became Grin’s only Top 40 chart entry.

By the time Grin released their third album, they had an additional guitarist. “My brother Tom Lofgren joined the band,” Lofgren said. “We just realized we had the rough, sparse thing covered as a trio, but now our music was getting a little more melodic and open and we really needed a fourth member.”

All Out (1973) is a thoroughly enjoyable record, if a little lightweight compared to its stunning predecessor. It was to be the band’s last record for Spindizzy, the controversial departure of Clive Davis making the band unhappy with the label. They ended up on A&M, but their final album, Gone Crazy (1974), is something of a damp squib, not just sales-wise but — for the first time — artistically. A&M pulled the plug.
by Patrick Prince, Editor of Goldmine 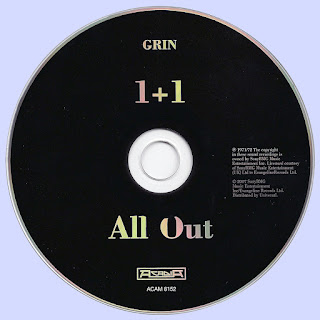 Free Τext
Just Paste
Posted by Marios at 7:37 AM 3 comments: