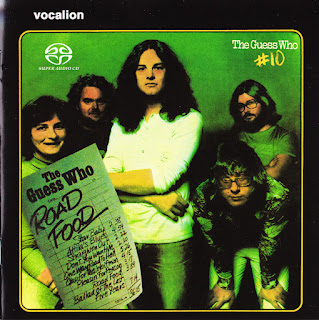 1973’s #10, is most famous for not being the bands tenth album. In fact, it was the 12th studio album. However, it was the tenth with vocalist Burton Cummings.
The album is more than decent and starts out with a good song in “Take It Off My Shoulders.” “Cardboard Empire” and “Glamour Boy” are also fine tunes that see Cummings reaching outside of his comfort zone and showing new sides to his musical vocabulary.
Missing from the album are any real hits. Because this album did not have any classic Guess Who moments some fans think it was a flop, however, when given a second listen, the album contains some good music, it is just not what fans of the band were used to hearing, and it's worth for checking it out.
by Jeb Wright
Road Food is filled with leader/singer Burton Cummings's intriguing variety of musical styles and bizarre lyrics. It is also thankfully free of filler. The music ranges from the blithe pop sound of the title track and "Star Baby" to the light jazz feel of "Straighten Out." Many songs evoke the pop/R&B styles of the Fifties and early Sixties, notably "Don't You Want Me" (with its Shirley & Lee piano), "Pleasin' For Reason," and the amusing "Clap for the Wolfman," a potential single with cameo interjections from the legend himself. The antique flavorings are subtle: The ambience is contemporary, with skillfull playing, smooth harmonies and Cummings' nonpareil vocals.
Lyrically Cummings mixes distorted snatches of classic rock & roll songs, sardonic commentary on the travails of touring, and tantalizing, if meaningless, images. "Hurricane wonder boy scratchin' for the scrunge now" or "Well, have you ever seen a Madras monkey/ Have you ever seen an Orlon eel?" reach the heights of whimisical absurdity, but "Don't You Want Me?" (redone from a previous LP) is a ridiculously exaggerated and bloodthirsty jealousy number.
The murky images come together in "Ballad of the Last Five Years," a moody, melodic blues higly reminiscent of Van Morrison's Astral Weeks monoliths: It's a haunting climax for a first-class album from one of rock's most consistently fascinating maverick bands.
by Ken Barnes, Rolling Stone, 6-20-74 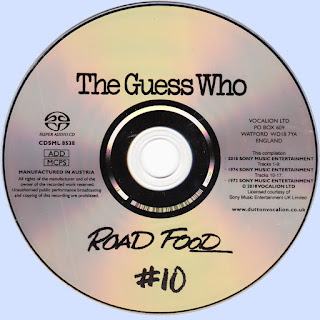 Free Text
Just Paste
Posted by Marios at 6:09 AM 1 comment: