Chuck And Mary Perrin - Life Is A Stream (1971 us, wondrous baroque folk, 2005 remaster and expanded) 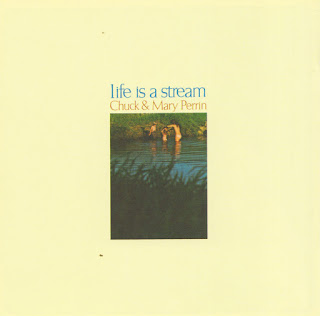 I was the oldest of 12 children, so naturally my  passion for folk music spread to my younger brothers & sisters. But  it was my sister Mary, 4 years younger than me, who seemed taken by it  the most. Of course, it helped that she had this amazingly unique voice,  honest & natural in timbre, as well as a great ear for harmony. I  started encouraging her, working out songs with her, & teaching her  to play guitar.

One night I called her up on stage to join me for a song or two. A  month or so later, in August of 1965, the Illinois State Fair held a  statewide Folk Song Hullabaloo competition.  Lots of high-powered,  banjo-pickin’, four-part-harmony groups from across the state laid it  down in Springfield.  But Mary & I, a fledgling brother & sister  act from little Pekin, impressed the judges with our simplicity,  personality, & blood harmony.  We took home the first place  Governor’s trophy, a check for $500, and an all-expense paid recording  session in Nashville.  The very next day, the Pekin Times put our  picture holding the trophy on the front page.

That was the beginning of Chuck & Mary.  We knew we had something  special.  Mary was only 15 years old, but she started learning guitar in  earnest & matched my voracious appetite for all things musical,  particularly acoustic music. Most importantly, she began to write her  own songs. By the next summer, when the Webster’s Last Word Coffee house  opened, we were a solid act.

1971, We ran across Irving Azoff.  Just out of college at the University of Illinois, he had his fingers in everything entertainment in Illinois at the time. He managed REO Speedwagon, & would go on in later years to become a mega-manager for acts such as the Eagles & Steely Dan. He was friends with an independent radio promo man in Chicago named Peter Wright, who was starting up his own labels: Twinight Records (for blues)  & Sunlight Records (for pop/rock). Irving, who was livin large even back then, flew us up to Chicago in his private plane & introduced us to Peter who decided to produce an album of our material to release on Sunlight Records.

We’d been recording in minimalist fashion. Now all of a sudden we were going into RCA’s studio complex on Wacker Drive to record on 16 track machines. We recorded the basic tracks for Life Is A Stream in January of 1971 using the talents of another of Peter’s signees, Chicago pop group THE NEW COLONY SIX as backup musicians. Notable is the keyboard work of Chuck Jobes, and the rhythm section of Dave Robin on bass and Billy Herman drums. Also appearing on guitar & dobro was Bruce Brown, who often toured with Chuck & Mary.  Peter had been a trumpeter with a big band background,  so his concept was to incorporate some creatively unique string & horn arrangements. He hired the great arranger  Hoyt Jones & gave him the tracks to score. They were performed in the studio by members of the  Chicago Symphony Orchestra.

During the next few years we continued touring, based out of Chicago, often opening for college concerts by Bill Withers, Richie Havens, and John Sebastian. We made a memorable cross country trip shepherded by  Daniel Markus, flexing the managerial skills that have made him infamous, even today. When we were in town, we worked often @ Richard Harding‘s Quiet Knight, paling around with other local folk performers getting started around this time, like Steve Goodman & John Prine.
by Chuck Perrin 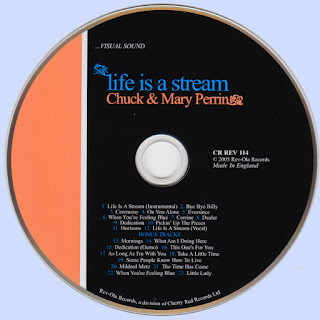