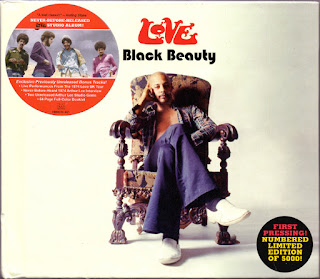 Supremely talented yet prone to devastating self-sabotage, Arthur Lee was on the ropes in the early 1970s. Glory days on the Sunset Strip, and authorship of one of the greatest records ever – Love’s Forever Changes – had soured, giving way to an incoherent odyssey, and a meandering, undistinguished string of new “Loves”. Occasional bursts of new inspiration were more likely than not to fizzle amid record label flameouts, reluctance to tour, and concomitant drug and personal problems.

Yet for those willing to a) overlook Lee’s steadfast refusal to relive the inimitable themes and textures of Forever Changes, and b) forgive him his excesses and volatilities, by the early ’70s Lee had begun to forge a forceful, distinctive new style: sizzling hard rock true to the spirit of his friend Jimi Hendrix; gritty, inner-city funk underpinnings à la Curtis Mayfield; a few nods to his folk-rock, pop-star past; plus bits of blues and reggae around the edges. Some of this material appeared in real time, in the shape of his ’72 solo outing Vindicator and Love’s ’74 swansong Reel To Real. More has surfaced on archival releases, like Sundazed’s 2009 set, Love Lost.

Bankrolled by entrepreneur Michael Butler (producer of the hit musical Hair) and reuniting Lee with his old Elektra friend, producer Paul Rothchild, Black Beauty was intended to be a culmination, the crowning achievement of Lee’s new direction. It ended up as just another scrapped project. Butler’s label, Buffalo Records, went belly-up before the disc ever reached the market. It would be Lee’s penultimate shot at the big time, 1974’s calamitous UK tour with Eric Clapton sealing his future on the margins.

Whereas, say, an early take of “Midnight Sun” sounds forced and claustrophobic on Love Lost, its Black Beauty counterpart burns with apocalyptic fervour, resonant of a camaraderie and telepathic interplay oft-lacking in Love’s post-Forever Changes work.

Opening with the gut-punch of “Good & Evil (Young & Able)”, a lascivious, un-PC piece of Hendrixian punk-funk, Black Beauty sprouts tentacles, beaming in testosterone-fuelled garage blasts (“Stay Away”, think Nuggets on steroids), the sumptuously anti-authoritarian riff “Lonely Pigs” and “Can’t Find It”, a haunting lament gliding on a gorgeously elliptical melody, with jagged guitar bits bubbling up through the mix.

For all its hard-rock glory – and Hendrix’ spectre casts a long shadow everywhere on Love’s 1970s work – Black Beauty is eclectic, shifting gears gracefully, suggesting myriad musical directions a healthy Arthur Lee could have pursued. “Beep Beep”, for instance, reflects his infatuation with reggae, and while it might be fluffy kid’s-song fare, it’s catchy as anything. An off-the-wall cover of The Rooftop Singers’ 1963 smash “Walk Right In” is also an inspired call, an album highlight, its jangly guitars and soulful vocal hook signalling a nod to Love’s 1966 folk-rock heyday.

“Skid”, though, with its Dylanesque sneer and gritty depiction of ghetto misery, is Black Beauty’s most startling cut. Lee is at his dramatic best here, falling into the song’s dark atmosphere with an eerie, ghostly desperation – one of his best vocals ever. Skittering from funky acoustic rhythms to a driving, haunting chorus to Whittington’s superb psychedelic guitar fills, one would think this song, if properly promoted, could have put Love back on the map. As it is, it’s an inestimable gem in the group’s vaunted catalogue, its majesty posing a giant “what if?” in the Love saga.

In fact, the better-late-than-never appearance of Black Beauty itself poses some big questions. Could Lee and company have refined, expanded and built on its strengths? Did Arthur have yet more material of this calibre up his sleeve? Nonetheless, supplemented by bonus tracks and Ben Edmonds’ fine liner notes, Black Beauty slots in as a fascinating, decidedly consistent effort from an artist in the throes of disintegration.
by Luke Torn 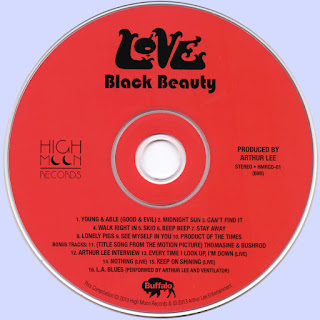