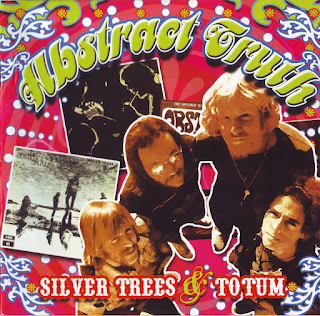 Abstract Truth - Silver Trees It’s difficult to imagine a more unlikely place for a fertile “head music” scene to emerge than South Africa in the late 60s. With racism and nationalism conjuring a cloud over social and artistic expression in a land isolated from the main stream of Western culture and commerce, it must have seemed that precious stones and metal were all the expedient West wanted from them. But natural forces respect none of these constraints, and the Summer of Love was a force of nature, a vibration that shook the world, with few places untouched by its promise of a passageway through the cosmic eye — Love, Peace and Understanding a possibility if you made the jump. A fertile sub-culture in South Africa did make the jump, creating a unique body of recorded psychedelia and progressive rock. But unlike that other Great Southern Land, Australia, not much escaped to the rest of the world. Unsupported at home, and unable to export their thing, the South Africa head bands generally winked briefly into existence, released what they could, and were gone. Almost.
Abstract Truth, September 1969 Totum provides a fair snapshot of the AT sound at this point in their evolution. One imagines a group of long-haired freaks jamming around a campfire on a beach near Durban; flute, acoustic guitar, tabla, sitar and sax riding a smoky, stoned jazzy groove through idiosyncratic reworkings of jazz, folk and blues standards by the likes of Donovan, Dylan, Gershwin, Mingus and Allison. The only band composition is the room-spinning, oddball freak-out “Total Totum/Acid Raga”, which isn't at all limited by only marginally competent sitar playing.
After many line-up shuffles, and the departure of Pavid to devote his energies to Third Eye full-time, Johannesburger Peter Measroch came in on keyboards and flute, and George Wolfhaardt left a Hendrixish trio in Cape Town to sign up to AT on bass, flute and drums (is three flute players in a band a record?). This is still 1970, but into the studio they go to record the classic Silver Trees (1970, SA EMI). Wishing to become more marketable and accessible perhaps, a full band sound is employed in the service of a suite of original compositions. Head concerns drive the opening track “Pollution”, which puts jazzy time signatures and flute up front, connecting the track to “Totum” somewhat, though it’s a tighter and more complex entity, transitioning to an African jive rhythm before the track closes out. George Wolfhaardt’s compositional skills are put to use on the following two tracks “All the Same” and “Original Man”, the latter being particularly cool, mining a vein of early Canterbury soft fusion-psych; another case in which the flotilla of flute action comes in handy. (“Original Man” is one of two tracks here that appear on the LPP compilation, the other being “Moving Away”) The title track is a hair-raising blend of gyrating bells, flutes, saxophones and zoned-out vocals forming a structured introduction to a free rock centre of the highest order.
In classic improvised jazz fashion the introductory patterns return for a structurally perfect coda. The track shades early Caravan and Soft Machine, and that takes some doing. “In a Space” is a laudable attempt at replacing some of the dream-like jazz instrumental covers of their early work with an original equivalent. The sax and guitar solo-trading here is worth the price of admission alone, had it not been already paid by the title track. Just because they can, for the next track AT switch to astral folk for the gorgeous “Moving Away”, which has some nice neo-medieval harpsichord and a sax solo that blows through like a tropical breeze. What is intriguing with tracks like “Moving Away” is the unique way instruments from different traditions are arranged into a seamless psychedelic flow. “Two”, “Blue Wednesday Speaks” and “It's Alright With Me” all shuffle the kaleidoscope of genres, running strata of music together with both opalescent complexity and pellucid clarity of purpose.
by Tony Dale 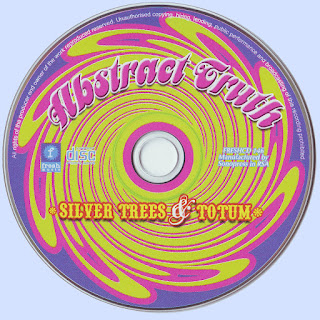 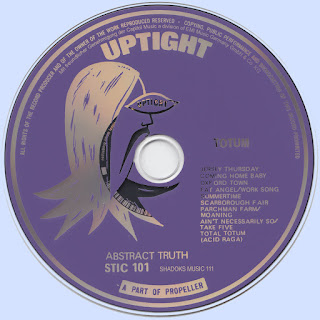