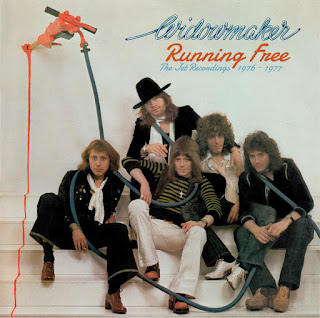 Widowmaker was formed in late 1975 by ex-Spooky Tooth and Mott The Hoople guitarist Luther Grosvenor, at the time known as Ariel Bender, as a means of recording songs he had written, something he had been unable to do since Mott The Hoople’s recordings were dominated by Ian Hunter penned tunes. Grosvenor was joined by ex-Lindisfarne drummer Paul Nichols and former Mungo Jerry and Chicken Shack bassist Bob Daisley. The trio became of the nucleus of the new band, with Grosvenor handling all the vocals.

The band decided that a lead vocalist would improve the band’s sound and as a result, Steve Ellis, formerly of Love Affair, was added, after his name was given to Grosvenor by Bobby Tench and Roger Chapman. At first Ellis wasn’t excited at the prospect of joining the band, but with some coaxing he took the job. Adding a keyboard was considered by the quartet, but in the end, guitarist Huw Lloyd-Langton completed the original lineup of the quintet, which took the name Widowmaker, although no one in the band can really remember why, and Grosvenor says he never liked the name.

The band’s first gig was a 24 February 1976 appearance on the BBC’s “Old Grey Whistle” when they performed the Grosvenor/Ellis/Nichols penned “On The Road” and the Grosvenor/Ellis composition “Ain’t Telling You Nothing” both of which appeared on the groups debut LP. Catching the eye and ear of Roger Daltrey, Widowmaker opened for The Who at three gigs in May and June of 1976.

The band signed with Don Arden’s Jet Records with Arden becoming their manager. Soon the group entered De Lane Lea Studios in Wembley and began work on their self-produced and self-titled debut LP. Among the album’s ten tracks are five which Grosvenor had a part in writing, including the hot rocking “Running Free.” The band was aided by keyboardist Zoot Money, and backing vocals were supplied by Bobby Tench, Roger Chapman, Julie Driscoll and Sam Brown. With Jet making changes in distribution the album made a late appearance in the US and reached only #196 on the Billboard charts, disappointing to the band and certainly not an indication of the quality of material recorded.

Undeterred the band toured with Jet label mates ELO, as well as Uriah Heep and Nazareth. However, musical differences, home sickness and a falling out with manager Arden resulted in Ellis exiting the band. At the recommendation of Lloyd-Langton lead vocals were taken over by John Butler and the band entered Olympic Studio to record its second LP “Too Late To Cry” with Chris Kimsey and the band coproducing. The album, smoother sounding, but lacking the raw sound of the band’s debut reached only #150 on the Billboard charts in the US. Although containing four guitar driven tracks co-written by Grosvenor, the highlights of the anthology for me, it had a smoother sound, but didn’t rock as hard as the debut and proved to be the final album by the group.

Widowmaker toured with Ted Nugent, Aerosmith and Mahogany Rush, among others, in support of “Too Late To Cry” but bassist Daisley departed to become part of Ritchie Blackmore’s Rainbow. In addition, Grosvenor was unhappy, and although the band’s albums were much better than average and the group could have gone on for another year or two at the least, the members decided to call it a day and Widowmaker was no more.

Running Free: The Jet Recordings 1976-1977 marks the first time both Widowmaker albums have been reissued on CD in their entirety. Three tracks from “Too Late To Cry” make their debut on the anthology and are joined by another Grosvenor co-penned, previously unreleased track “Talk To Me.” The Esoteric Recordings reissue, compiled, conceived and coordinated by Mark Powell, with assistance from his wife Vicky, has the band sounding better than ever thanks to the 24-bit remastering job by Ben Wisessman at Broadlake Studios and the 16-page full color booklet includes an informative essay by Malcolm Dome and is filled with photos of the band, album artwork, posters, and other memorabilia, making “Running Free” the unquestionably definitive Widowmaker anthology. The collection will be appreciated by fans of hard rock and the incredible guitar work of Luther Grosvenor alike. Many thanks to the Powells and the folks at Esoteric Recordings for making this fine collection available.
by Kevin Rathert, August 29, 2017 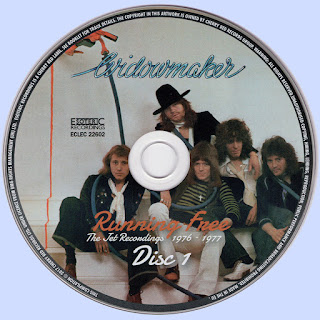 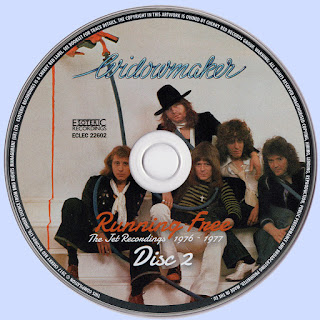 Free Text
Text Host
Posted by Marios at 4:38 AM No comments: