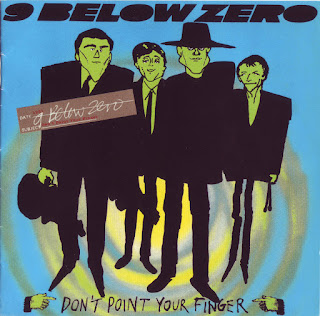 Underrated and overdue, Nine Below Zero get the re-issue treatment, complete with live set that captures their scorching heyday. Joe Whyte celebrates a criminally undervalued and influential band.
They were a hard one to pin down all those years ago. The obvious Feelgoods influence was there, late 70s, but they were way too cocksure and sharp to fit in with the decaying pub rock scene. Sure, they were energetic enough to be tied in with punk but they had the musical chops and grounding in R&B and the blues that kept them separate. The mod revival toddled along and toddled off again pretty quickly and despite Nine Below Zero having the monochromatic razor-creased suits and the proper influences, they weren’t pretty boy enough for most of the fledgling modsters. In fact, let’s be honest, Nine Below Zero looked like they’d be more likely spotted running out of a bank holding sawn-off shotguns and wearing balaclavas than admiring each others scooters and three-button suits.
Building a fiery live reputation in the capital and signing rapidly with A&M they released, in the style of the Feelgoods and Eddie And the Hot Rods, a debut record that was recorded live, showcasing the sweaty, feverish shows they were renowned for. Live At The Marquee scorched their reputation large in the consciousness and the band seemed set for great things.
Their sophomore release in 1981 only served to enhance the band’s reputation. The Glyn Johns produced Don’t Point Your Finger (remastered and packaged here with a live 1981 Bristol set) is a thing of real wonder. If this was released today by a band like The Strypes we’d be worshipping at the altar of the new best thing. No doubt due to the quality of the competition at the time and despite entering the charts twice, the album wasn’t the massive hit it deserved to be. At the time, 9BZ toured with The Who and The Kinks and made a legendary appearance on The Old Grey Whistle Test which is still pretty staggering today.
Don’t Point Your Finger delivers on all counts; One Way Street is all chopping guitar growl and Mark Feltham’s swooping blues harp with the don’t-mess-with-me snarl and pleading croon of Dennis Greaves’ vocal delivery. Doghouse takes the band’s Sonny Boy Williamson/Son House/BB King influences and drags them kicking and screaming into some dank London boozer and kicks the shit out of them. It’s all short, sharp and very good fun. Yeah, it’s the blues, but without the angst and Clapton-style ham-fisted attempts at middle-class white-boy-wishing-he-was-from-the-delta that infects the genre. Nine Below Zero don’t pretend to be anything other than fans who love playing this stuff. The energy and verve they bring to these songs is palpable and as infectious as rabies. Helen takes their typical Rhythm and Blues template and adds the kitchen sink drama that made Costello and Squeeze such big successes.
The live set from 1981 (The Granary in Bristol, recorded for BBC 1 In Concert) is pretty irresistible. Opening with Don’t Point Your Finger At The Guitar Man it sets out its stall quickly and succinctly. The crowd goes ape shit and the group are a finely tuned and aggressive sounding bunch. It’s no surprise to learn that 9BZ barely had a day off the road in their early years as this sounds like a group at the top of their game with the bass/drums combo of Brian Bethel and Mickey Burkey in swaggering form. Greaves, of course, is a guitar slinger of some repute; his searing chords and biting leads would have given a certain Mr. Weller a run for his money.
The live set includes a few songs from the next album and it’s interesting to hear their gestation and evolution, particularly 11+11 and True Love Is A Crime which are staples of the band’s set to this day.
Third Degree was again recorded at Glyn Johns’ studio in 1982 with Simon Boswell helming and they made another epochal TV appearance as the first guests on new (and at the time, anarchic, although it doesn’t date very well!) comedy The Young Ones with a scorching run through of the aforementioned 11+11.
Third Degree is still considered to be something of an under-rated album and this re-issue certainly backs that theory. The production is crisper and slightly more polished but little of the group’s edge is lost. The songwriting is a step up from the previous release with a more mature and classicist slant – how Wipe Away Your Kiss wasn’t a huge hit is a mystery to this day. They were just one of those unlucky bands, Nine Below Zero, never there at the right time. A couple of tracks don’t really work on Third Degree; Sugarbeat is a little trying-too-hard to be clever and as an attempt at a disco pastiche it’s a little weak. Egg On My Face in contrast is an acoustic-led song with some calypso-style flourishes which please.
The re-issue is twinned with a Glyn Johns produced earlier attempt at the album (which the record company nixed) and is a worthwhile addition, highlighting the album’s first incarnation and including some unreleased songs. Johnnie Weekend is a cracker that didn’t make the finished product and it’s nice to hear it here.
by Joe Whyte, March 9, 2014 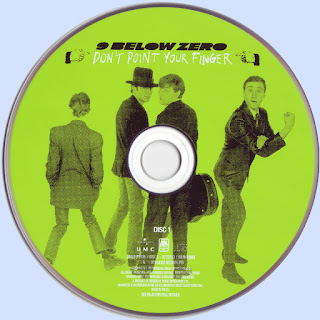 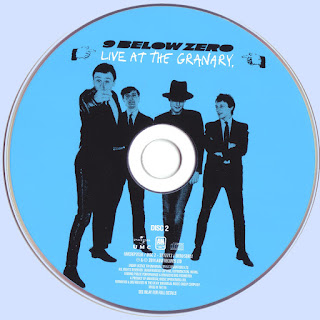