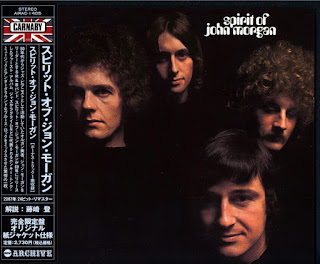 Keyboard player and vocalist John Morgan was a Graham Bond afficianado who turned toward psychedelia as the 1960's wore on. Billed originally as The Spirit of John Morgan, the band was successful enough to get booked into the Marquee and other top clubs.

Spirit of John Morgan's debut self-titled is an entire album's worth of strong, shadowed, R&B numbers underlit by magnificent musicianship and powerful rhythms. The set opener, a menacing cover of Graham Bond's "I Want You," is a case in point, stalker-like in its intensity, with John Morgan's organ conjuring up a phantom of the opera from which there is no escape. However, Morgan's phenomenal finger skills are best showcased on a cover of Meade "Lux" Lewis' "Honky Tonk Train Blues," a fabulously masterful piano boogie woogie, as is his equally extraordinary adaptation of Albert Ammons' "Shout for Joy." And Morgan is just as skilled on the organ, as is evidenced on the band's take on Big John Patton's "The Yodel."

As astounding as the covers are, the quartet offered up their own numbers that are of equal quality. "Orpheus and None for Ye," is a particular standout, a dark, driving number that initially calls to mind the Spencer Davis Group before diving into the heart of the jungle, while Don Whitaker's guitar licks like flames around the piece. It is the set's final number, however, the ten-minute epic "Yorkshire Blues" that is the heart of the album. Delta blues brought to the English north, where the band convincingly make the case that life is just as tough up mill as it is down in the fields of the Deep South. In 43 minutes and with a mere eight songs, Spirit of John Morgan created an astonishing set, and this reissue appends it with the band's romp across "The Floating Opera Show," the A-side of their now impossible to find 1971 single. As if you needed another reason to own this set.
by Jo-Ann Greene 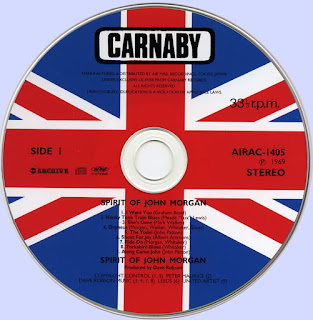