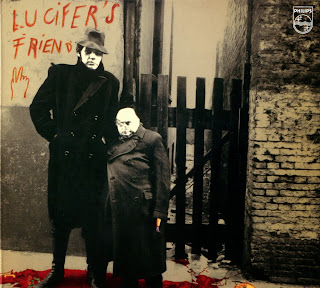 A German band from the early Seventies who were successful abroad, even in the States? What sounded like wishful thinking at the time applied, at least for a few years, to Lucifer's Friend from Hamburg. Not only the enthusiastic press reactions to their 1970 debut, but also top positions in the readers' polls of major American music magazines surprised even experienced product managers in Germany. But when American TV stations started to enquire about the band, Lucifer's Friend found themselves faced with a problem that had remained hidden from most media representatives: the group existed only on paper, or rather in the studio. The musicians involved – Peter Hesslein (guitar), Peter Hecht (organ) and Dieter Horns (bass) - had disbanded their beat group, German Bands, two years previously and recorded - more or less as an experiment - a handful of songs, initially without a vocalist or any clearly defined concept of how to go on.

Between German Bands and Lucifer's Friend lay the foundation of the group, Asterix. Established in 1969, this act marked the arrival of the musicians Hesslein, Hecht, Horns and Joachim Reitenbach (drums, also ex-German Bonds) on the rock scene. Their first attempt failed, and the project was terminated after two unsuccessful singles and a self-titled debut album. What was left was the musicians' ambition to found a band which, according to the Zeitgeist, concentrated on rock instead of beat music. Their second try featured a different line-up and succeeded. Thanks to the single, Ride The Sky, and a rock sound that seemed tailor-made for American radio preferences, their eponymously titled debut album scored in a big way.

British vocalist John Lawton joined the group when the album production was already underway. The musicians had discovered him during a gig with his band Stonewall at the Top Ten live club at Hamburg's Reeperbahn and enlisted him as a studio musician. Lawton was also on board when Lucifer's Friend decided in view of the great reactions at home and abroad to turn their studio project into a regular band, performing live shows. The music on the debut turned out to be a mix of Anglo-American hard rock, blues, soul and early variations of what was to develop into heavy metal.

The press praised the LP by this "super-dynamic German rock quintet with more than slight Led Zeppelin resemblances", yet album sales in Germany were very slow to start off with. Their career began to gain momentum when Chicago import record company Billingsgate – who Epitaph were to have an unpleasant encounter with later - licensed the album, sending out specimen copies to the country's most important radio stations. Suddenly WMMS, Cleveland's most popular radio station, discovered the catchy Ride The Sky, catapulting Lucifer's Friend to no.2 of the city's best-selling albums (directly behind Pink Floyd) and establishing the basis for a long period of success.

During the following years, Lucifer's Friend continued to produce successful rock albums with changing line-ups, but were unable to live from their music alone, some band members having to work with the Les Humphries Singers on the side. Following Mind Exploding (1976), Lawton left the band to join Uriah Heep, returning in 1981 to record the final album, Mean Machine, and was also involved in the unsuccessful comeback attempt, Sumogrip (1994), which featured a new version of Ride The Sky. Subsequently, Lucifer's Friend were put to rest permanently.
by Matthias Mineur 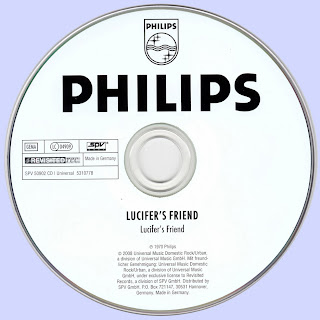 Free Text
Text Host
Posted by Marios at 4:47 AM