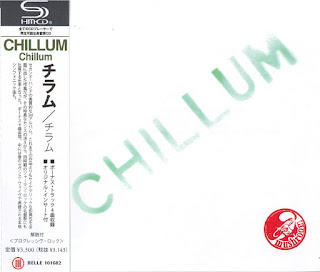 Chillum was one of the bands featured on the now famous Mushroom label, which has become one of the most collectable independent labels from the early seventies. The label's small release schedule, the originality of its artists and the diversity of their music, almost guarantee that vinyl collectors prize ownership of an original Mushroom issue for musical content and rarity alike.

The label was founded by Vic Keary, who recorded most of its releases at London's Chalk Farm studios, where he worked as an engineer. It was Vic's vitality and enthusiasm that ensured bands like Chillum were released. The Chillum album (this is supposed to be the 3rd Secondhand album) has a tale or two behind its release. Secondhand had parted company with their guitarist and were involved in a seemingly fruitless search for a replacement.

One prospective axeman was Tony McGill; his audition, held at the Chalk Farm studios, was fortunately recorded and it was during this session that he and the band formed such an instant rapport that Vic, taping everything as usual, just allowed the tape to run. Now we have a chance to hear the raw, unedited result of this first meeting with Tony as "Brain Strain ".

After a break, another jam session took place - "Yes We Have No Pajamas ". The laughter that can be heard at the beginning of Chillum's "Land Of A Thousand Dreams " is attributable to a couple of young doctors from the nearby Royal Free Hospital, who wandered into the studios because they could hear the band from the Belmont Pub next door (now called The Engine Room), where they often went for a drink.

This epic session extended into early morning hours, when drummer Kieran fell asleep after recording his drum solo. Vic recalls with obvious relish that breathing or snoring mightily, with headphones still clamped to his ears, Kieran's somnolent efforts were recorded and then played back to him, so he was able to double track for about three minutes in perfect sync while still asleep, thus providing the ending "percussion" track for "Land Of A Thousand Dreams ".

The grunt at the very end represents engineer Vic's none too delicate wake up boot. Its this raw, as it happened, unrehearsed craziness that shines through the playing. Chillum's music has much of the originality and inventiveness these musicians brought to their releases, with unfamiliar time sequences and rhythm patterns on some of the tracks.

The lengthy workouts and the live, unrestrained format allowed them free reign to experiment with the unusual in the informal atmosphere these sessions generated. The acoustic track "Promenade Des Anglais " was Tony's interpretation of a song Ken had written about a street in the south of France, where the band often played on tours. The bonus tracks "Fairy Tale" and "Celebration" were recordings made after the band returned from a further European tour; these were never released, as this line up split up shortly afterwards. "This Is Not Romance" was a recording made by Ken with just a Steinway grand piano, just before the main album was recorded.

This song was never used on any other album. "Incubator" was a track created by engineer Mike Craig, using a Leslie-type speaker and on audio oscillator. The sleeve credits on the album deserve some explanation. The band and Vic decided to use pseudonyms, because a couple of their overseas distributors suggested they release a session featuring some famous London musicians, even if they played under assumed names.

So, for the record, Ken became Elliot Ness, Kieran was Max Fish, George changed to Sticky Schmaltz and Tony, for no apparent reason, evolved into Buddy Cuddy. Engineers Vic and Mike Craig were not spared this evolutionary process and duly became Blind Joe Smith and Herr Von Tskutting. The distributor's reaction is unfortunately unknown. Chillum's album sleeve was produced "cottage style", after the first attempt was banned by Music Week.

Taking the Beatles White Album as their influence, the band hand printed, painted and stickered each plain sleeve, using car aerosol spray, an old printing set and some rubber stamps. By mid 1972, the Mushroom label ceased to record and release albums. This was a tough time for Vic and his circle of close musician friends. It was with great sadness that he admitted defeat, forced to stop releasing a series of highly original albums that so closely reflected his love of music. But the musical force that was Ken Elliot drove Chillum & Secondhand onward.

Lacking a label did nothing to stop the creative process and shortly after the final demise of Mushroom, Seventh Wave were born from the remains of the previous bands. They released two albums "Things To Come" and “PSI-FI"on the Gull label in 1974 and 1975. 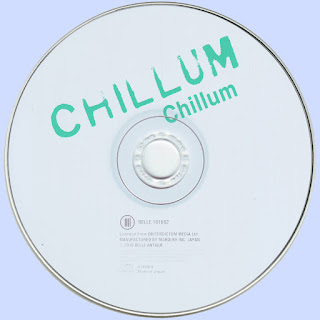