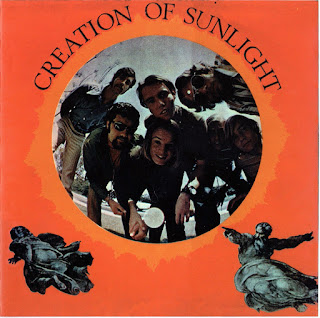 They started off as Sunlights Seven and recorded an LP entitled Sunstroke in 1968. This recording never got beyond the acetate stage by DCT Recorders and is a monster, monster rarity that has not been reissued. The picture of it below, taken from the book 1001 Record Collector Dreams, shows that at least 5 songs were recorded, 2 of which did not show up on their eventual LP for Windi Records. These are Sevens Theme and Judy In Disguise. The other 3 songs shown in the picture, David, Light Without Heat and In The Middle Of Happy were released on their eventual LP, but probably as re-recorded versions.

After the Sunstroke project was scrapped, the band hooked up with Windi Records and recorded a 7" under the name of Sunlight. This 7" consisted of Colors Of Love and Sometimes A Woman and was released under catalogue number W-1001 and W-1002. The versions of these songs are different than the ones that appeard on their LP. It is possible that these versions appeared on the flip side of the Sunstroke acetate. I have read that a non-LP 45 was released by Sunlights Seven, but have never heard or read anything else about that release so I suspect that this may be the item in question.

Finally settling on the name Creation Of Sunlight, they continued recording for Windi, finally releasing their self-titled LP and one 7" later in 1968. Their self-titled album on Windi WS-1001 contains 10 songs, 8 of which are original compositions with Gary Young and Jerry Griffin doing most of the songwriting duties. Interestingly, the credits for David, which was not written by the band, differ on the 7" and the LP. The entire album is absolutely great, loaded with organ and fuzz guitar just oozing with that acid and sunshine vibe. Original copies of this LP almost never turn up for sale and when they do, expect a really nice copy to reach four figures. This is one of the (too) few rarities that can musically justify their price tag. The only vinyl reissue has been a European bootleg on the "Windi" label. This is a nice sounding and nice looking job and it too seldom comes up for sale.
by John E. Midnight 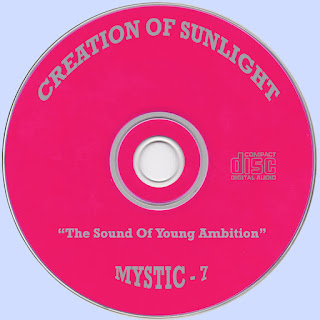 Free Text
the Free Text
Posted by Marios at 10:48 AM 2 comments: