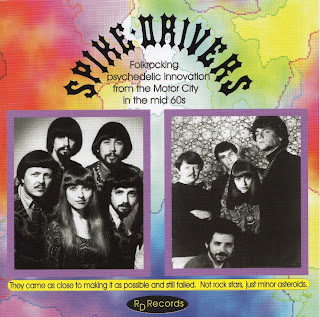 The Spikedrivers had two line ups between 1965 and 1968 when these (largely) demo recordings were made. With dual male and female vocals some of these tunes are resonant of early Jefferson Airplane (Often I Wonder, Strange, Mysterious Sounds, Baby Let Me Tell You) whilst here and there, there is a definite Fairports influence (e.g. Portland Town).

Many of the first nine cuts along with tracks 14 & 15; Can't Stand The Rain and I'm So Glad (no, not the Cream song) are infectious and you will soon find yourself humming them all day. There is a small patch of five numbers from their second incarnation though which have been over-recorded (in a rehearsal room seemingly) and which are supposedly ragga based, but which actually descend into over-amped acid-fried mayhem (Grocery Store, Everybody's Got That feeling, I Know, Time Will Never Die, Sometimes) which you will either love or skip past.

So, an uneven set, but not surprising given that most are demo and rehearsal recordings from two different line-ups covering the transition from folk-rock to (heavy) psychedelia. As an all-round package and artefact however, it has history, a story to tell, colour and great hooks - I would grab it with both hands!
by Paul Martin 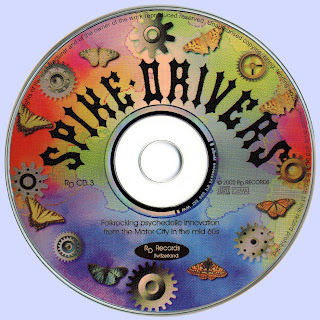 Free Text
the Free Text
Posted by Marios at 9:25 AM