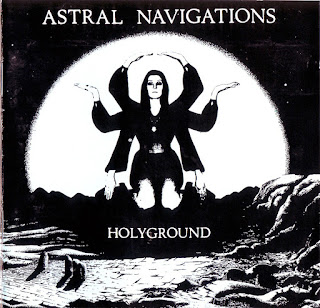 “Lightyears away: melting off the sea by the Coastroad / in the dead land. You can hear, almost hear that place, softly, naked, unknown / voices appear behind distant mountains / and now simple beauty. Time ticks by. Reality, but we’ll do what we can do. We are there but so many of us are not, how to make them understand? The Astral Navigator is here - he’ll tell them. Yesterday: Your whole mind is suddenly jerked and slowed down, only to be speeded up and thrust back / through to the new North Country Cinderella - then Coombs’ Surprise Symphony. Now the spaceship talks . . .
Thundermother: Gentle heavy chords pump the brain / take the ride again and we do. Rock Banshees. It’s a long, long way back home. But it’s really nice here / Boogie! Solid driving bass cracks the ground beneath your feet, and maybe at the end all those things they bin shakin’ about have just slipped through the cracks / Fucking good, go on sell a piece of your mind to Holyground”.
by Pete Ball, from STYNG, Yorkshire’s underground newspaper,1971
The album is divided into three - Mike's songs with Brian Calvert; Chris's songs; and on side two Thundermother. Mike labeled the SIDES of the album 'Lightyears Away' (side one Mike, Brian and Chris); and 'Heavyside Layer' (side two, Thundermother). There is thus no single artist, and like A to Austr, Astral doesn't really have one. Over time the idea that there were two groups had arisen 'Lightyears Away' and 'Thundermother'. A to Austr had a by-line: "Musics from Holyground" . Astral had a similar one on a couple of posters: "Music For The Human Mind".
To mark the split between Mike's / Brian's songs and Chris's songs Mike added the Apollo rocket launch sound effect. 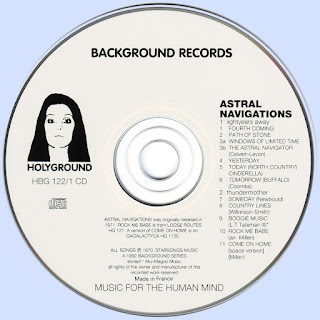