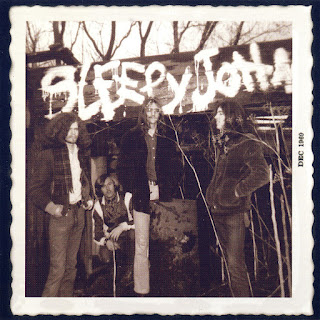 Hard-driving Lewiston, ID, rock quartet Sleepy John came together at the tail end of 1969, formed by David Lee (keyboards, vocals), Tom Williams (drums), Jim Bartlett (bass, vocals), and Frank Trowbridge (guitar, vocals). Lee and Williams had begun playing together all the way back in 1963 in the Lounj Men, a first band for both teenagers. Like a majority of the garage combos that popped up in that year, the appearance of the Beatles on the American scene was their stimulus and model, though they mostly played instrumental rock & roll on the order of the Ventures. When Lee's family moved to Boise in 1965, he met Trowbridge and, over the subsequent few years, the two formed a pair of beat outfits, the Wondering Kind and Destiny, until the threat of the military draft convinced the friends to relocate to Seattle.
Coincidentally, that very same month Williams, Jim Bartlett, and guitarist Clark Osterson had decided to move their band, Free, from Valhalla, ID, to Seattle as well. In a fortuitous bit of synchronicity, they found themselves bunking in the same boarding house as Trowbridge and Lee. Free found limited success in the summer of 1969 playing the regional open-air festivals, while Lee's new outfit, Silver Bike, worked the local club circuit. When Osterson decided to leave Free, Williams and Bartlett persuaded Trowbridge to return to Lewiston and start a new band. Silver Bike broke up at about the same time, and with Lee also joining the fold, the newly christened Sleepy John -- named after Tennessee "crying" bluesman Sleepy John Estes -- became a four-piece.
Having formed out of the ashes of several working bands, Sleepy John immediately drew from wellspring of developed original material, much of it in a straightforward hard rock vein, though with interesting strains of prog rock and country music, and some subtle satirical inclinations. Improvisation was the quartet's forte, and its communal Sleepy John House was a hot spot for area musicians who wanted to jam. This helped the group, by early 1970, to develop a distinctive sound and, using connections made during the members' previous stay in Washington, to earn key gigs in neighboring Spokane (to where they would eventually relocate), after which they landed steady work throughout the Northwest and Canada, opening for and sharing stages with Badfinger, the Zombies, Moby Grape, and the Mothers of Invention, among others. Frank Zappa was so impressed with their music that he requested Sleepy John to play several dates with his recent discovery, Wild Man Fischer. That spring and summer, the band also completed two separate recording sessions, laying down enough material for an LP's worth of their original songs, all engineered by their friend Paul Speer of fellow Idaho band Stone Garden. Those recordings went unreleased at the time but would eventually form the basis for the 2004 Gear Fab retrospective CD Sleepy John.
After a spiritual awakening and prior to the second recording session, Bartlett left Sleepy John to join the popular Christian band Wilson McKinley, a leader in the early-'70s Jesus rock movement. L.A. transplant John "Bosco" Jackson, who had gone to high school with the Turtles' Howard Kaylan and Mark Volman and played in a pre-Steppenwolf combo with John Kay, took over bass duties, and the band continued to sustain its regional popularity. It would last more or less into 1972, when the quartet slowly and quietly dissolved. Lee moved to Seattle and joined Stone Garden. Trowbridge formed Blind Willie with another bunch of expat southern Idahoans and had success on the Northwest rock circuit. Lee and Williams also hooked up again in the successful retro '50s revue, Louie & the Rockets, which eventually became the Unholy Rollers and then just the Rollers. With a revolving door membership -- including stints by Paul Speer and Trowbridge -- and pronounced comedic elements, the Rollers had a successful eight-year run throughout the United States and Canada before the onset of disco stalled its momentum.
by Stanton Swihart
Sleepy John interview by Klemen Breznikar 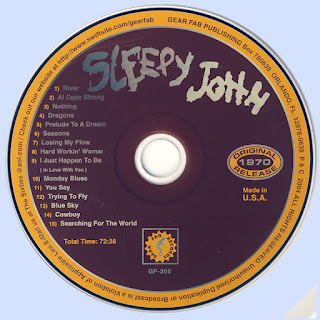