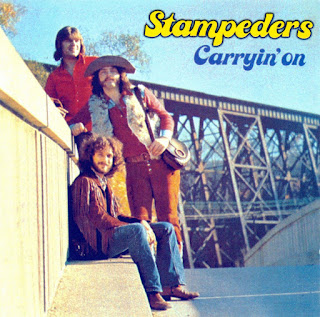 No seventies group represented Canada's musical identity to the world like The Stampeders. A quick look at Canada's music scene from 1971 until 1976 confirms The Stampeders were truly the country's international musical ambassadors. Instead of trying to blend into any specific format, they developed their own identity, which was both entertaining to watch in concert, and to listen to on radio and records. The Stampeders also toured more extensively in Canada and overseas than any other Canadian group of the same period.

While there were various line-ups of the group during their 15-year run, the three-man line-up of Rich Dodson, Kim Berly and Ronnie King was, by far, the most successful and most widely-adored by the fans.

In January of 1965, The Rebounds entered into a relationship with manager, Mel Shaw, and officially became The Stampeders. Len Roemer was replaced by Cornelis Van Sprang, known professionally as Ronnie KIing, and his brother, Emile, who used the stage name Van Louis. The six-man group started wearing assorted-coloured denim outfits and cowboy hats with the idea of promoting a group of cowboys playing rock 'n roll. During their first year as a band in Calgary, they had one single release on the SOTAN label entitled "House of Shake" b/w "Don't Look At Her."

Anticipating better things to come, The Stampeders decided to move to Toronto in 1966. At the invitation of Bigland booking agent, Ron Scribner, the six-man group, along with Mel Shaw and his family, loaded up their $800, used, '62 Cadillac limousine and U-Haul trailer, and left Calgary heading east to the 'big lights' of Toronto. Though most of the members were under the legal drinking age, they managed to beg, borrow and work their way across Canada, playing bars and various one-nighters. Upon their arrival in Toronto, the Western-Canadian band, with their yellow denim T-Kays, cowboy boots and hats, became an immediate curiosity in the folk-oriented, hippie clubs of the Yorkville district. Though the first year was an extremely lean one, the band managed to survive the six-month, Toronto Musician's Association's initiation and find work in the bustling Toronto club scene.

The Stampeders finally had a breakthrough late in '68 with a single they recorded while on a sight-seeing trip to New York. Released on the independent label, CARAVAN, "Morning Magic" b/w "All The Time" wasn't much of a sales success, but critical acclaim earned the group a BMI (Broadcast Music Incorporated) Award.

The first major-label single release, "Be A Woman" b/w "I Don't Believe," came in 1968 on the MGM label in the U.S. The Stampeders played the rhythm tracks and sang the vocals while an inhouse MGM producer added a 16 piece string section. This was to be The Stampeders' final release as a six-member group. Late in 1968, the three oldest members - Brendan Lyttle, Van Louis and Race Holiday -left the band, leaving the line-up of Rich Dodson, Kim Berly and Ronnie King.

The period from late '68 to the mid '70's was a time of evolution for the new, three-man Stampeders in which they would develop their own sound, a sound that would take them around the world. The stage set-up had Dodson on guitar, King on bass and Berly on drums, while all three members shared lead vocals. With the exception of Dodson, the cowboy hats came off, they all still wore boots, but the colored T-Kay denim outfits became history. During this period, the band toured around Ontario and Quebec developing their stage show with the help of their new road man, lighting-wizard, Stan Whitcher, winning fans and becoming an in-demand club and one-nighter attraction.

The Stampeders' only release during 1969 was "Cross-Walk" b/w "I Don't Know Where I'm At Sometimes" on the Melbourne label, distributed by London Records. Quality Records, then a major independent label in Canada, became interested in the band. By mid-1970, The Stampeders were in the studio working on their first album, "Against The Grain".

"Carry Me", the first single from this session, quickly hit the top of the Canadian charts, garnering the band it's first gold record. Simultaneously released on Polydor in the U.S., the single got lots of play but didn't quite make the charts. Canadian success, however, allowed the band to complete the album with one of their favorite recording engineers, Terry Brown. The resulting LP, "Against The Grain," was concurrently released with the next single, "Sweet City Woman" b/w "Gator Road." The band, along with it's new road crew -- Bob Luffman, Joel Wikhammer and Ian 'Snake' Dunbar -- was finally on it's way.

The summer of 1971 saw "Sweet City Woman" climb the charts to the Number One position across Canada, catching the attention of the American label, Bell Records. The band was signed immediately and Bell rush-released the single in the U.S. Even though it was up against classic songs like The Doors' "Riders On The Storm," Paul and Linda McCartney's "Uncle Albert," and James Taylor's "You've Got A Friend," "Sweet City Woman" climbed the Billboard charts, reaching the Number Eight spot on September 11, 1971.

The band recalls the time they pulled over to the side of the road at four-o'clock in the morning, while enroute back to Toronto from a gig, and jumped around the car with excitement after hearing "Sweet City Woman" fading in on radio station WABC in New York City as the Number One record of the week. Bell records renamed the album "Sweet City Woman" for the U.S. market to capitalize on the success of the single. Next came 'Juno Awards' (Canada's version of 'The Grammy') for 'Best Vocal Instrumental Group', 'Best Producer', 'Best Single' -- and their first European tour.

1971 also saw the release of The Stampeders' second album "Carryin' On", featuring the lead-off single, "Devil You" b/w "Giant In The Streets". Although it was the last record released in the U.S. on Bell, the album gained a release in Europe on Regal Zonophone. It featured hard rocker "Wild Eyes", a song that gave their sound more edge and introduced the band to a whole new audience. Part of the appeal of The Stampeders was their musical versatility.

In 1972, at the request of their U.K. label, EMI, The 'Best Composer' Stampeders toured The United Kingdom. Upon their arrival, they discovered that their American hit, "Sweet City Woman", had already been covered by The Dave Clark Five. Dates included the Marquee in London, the Hard-Rock Theatre in Manchester and appearances on BBC Radio and "Top Of The Pops." Both Phillips and Bovema-EMI Records helped support the balance of the tour through Holland, Germany, Denmark, France and the rest of Europe with British rock band, Steam Hammer. Holland was especially receptive to the band, partly due to the fact that Ronnie King (Cornelis Van Sprang) was a fellow Dutchman, having been born in Rotterdam.

In Holland, The Stampeders received the prestigious 'Edison Award' for "Most Promising Group," along with Ry Cooder and Beach Boy, Carl Wilson. Carl was in session at the time, along with the rest of The Beach Boys, recording their classic "Holland" album. During this visit, The Stampeders had the privilege of staying at Amsterdam's Hotel Weichman with the infamous Eagles. While Kim and Rich shared road experiences with Eagle drummer, Don Henley, Ronnie King and some of the other band members spent their time window-shopping in the famed, Amsterdam red-light district, only to find themselves locked out of the hotel upon their return.

1972 also took The Stampeders to Los Angeles to perform at the legendary "Whisky A-Go-Go" and tape their appearances on "Don Kirshner's Rock Concert" and "The Dating Game." While hanging out at The Troubadour in Hollywood, Ronnie King met Keith Moon, drummer of The Who. Keith took a liking to Ronnie and asked him what he and The Stampeders were doing the next night. It happened to be Keith's birthday and he wondered if The Stampeders might be available to play at his party at The Beverly Hills' Wiltshire Hotel. Ronnie quickly replied, "Of course," and The Stampeders ended up on stage performing for some of Hollywood's rock elite and jamming with Keith Moon. Attendees at the party included Beach Boy, Brian Wilson, Neilson, Rod Stewart, Ron Wood and the then-infamous porno star, Linda Lovelace.

Heavy airplay and extensive touring, coupled with many guest appearances on the popular Canadian TV shows of the time (Anne Murray, Miss Teen Canada, Kenny Roger's "Rollin' On The River" and The Ian Tyson Show), eventually led to The Stampeders' starring in their own CBC-TV special, "A Short Visit To Planet Earth".
Santero 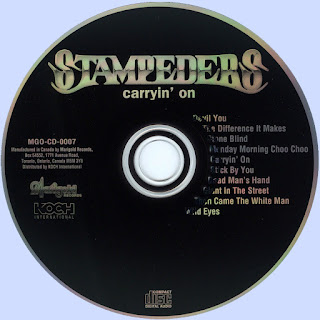 Free Text
Just Paste
Posted by Marios at 10:52 AM