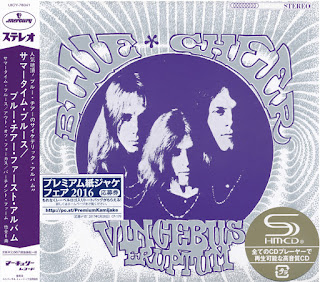 To describe Blue Cheer, the first word that comes to mind is . . . loud! It was said that the band’s sonic blast could “turn the air into cottage cheese.” The classic “power trio” lineup of guitar, bass and drums is more than capable of knocking down a house, as we easily find out on Blue Cheer’s debut LP, ‘Vincebus Eruptum,’ released in January 1968.

Blue Cheer have been cited by many as being the world’s first heavy metal band. That’s true to some extent, perhaps. Iron Butterfly were already on the scene, while Grand Funk Railroad and Led Zeppelin were right around the corner, but none of them were as single (or simple) minded as the bludgeoning attack that was Blue Cheer. In a blur of Roger Corman films, amphetamines, LSD, long hair, loud guitars and teen lust, the roots of metal, grunge and stoner rock can all be found on this one album.

Blue Cheer were managed by a former Hell’s Angel called simply “Gut,” and though they may have shared a home base (San Francisco) and a pharmacist (Owsley Stanley) with the Grateful Dead, their musical approach was very different.

Singer/bassist Dickie Peterson, guitarist Leigh Stephens and drummer Paul Whaley made one hell of a noise, while producer Abe ‘Voco’ Kesh found the group’s deafeningly definitive sound. The album is split between three cover songs, and three originals written by Dickie Peterson. Of those originals, ‘Out of Focus‘ is a classic. With a funky guitar riff leading the way, the song rides a heavy groove. The tone of the guitar alone defines the Blue Cheer sound — a Big Muff fuzzbox plugged into Marshall amp and cranked up loud. The circular riff of the song is hypnotic and ranks as one of the band’s finest efforts.

Their classic ‘Parchment Farm‘ (a cover of Mose Allison’s ‘Parchman Farm’) is a glorious case of taking the simple blues and transforming it into their own monster. It’s a driving rocker that has the eternal pedal to the metal. ‘Doctor Please‘ is a rollicking number about Peterson’s first time delving into the world of LSD. As Owsley states on the back of the LP, “Subtle color of the mind – BLUE, call the figure of the soul – CHEER.”

The band managed to have a hit single amidst all the heavy fuzz going on. Their cover of Eddie Cochran’s classic ‘Summertime Blues‘ lit up AM radio in 1968 and climbed the Billboard charts to No. 14. It would be the band’s sole hit single. It is the definitive Blue Cheer song in so many ways. They capture the angst and raw teen emotion of the Cochran original, but, like some crazy Ed ‘Big Daddy’ Roth vehicle, it’s all souped up and driving way out of control. It certainly didn’t sound like a lot of what was on the top of the charts, but in those times, it really was a stylistic free for all that somehow made sense.
by Dave Swanson 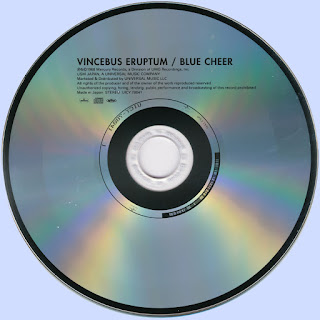