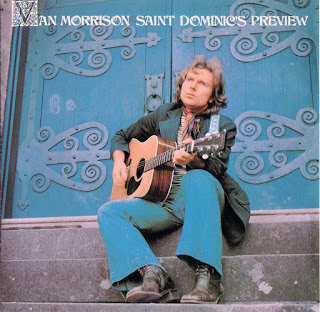 The best-produced, most ambitious Van Morrison record yet released, Saint Dominic's Preview presents an impressive assemblage of musical ideas that can be enjoyed on many levels. Though the album does not have quite the surface accessibility of Tupelo Honey, being melodically less predictable and lyrically more esoteric, its overall content is musically much richer and more adventurous.

Five of the album's seven cuts pick up where Tupelo Honey left off, as Van and many of the same crew who put together Tupelo further refine and extend the possibilities of the mainstream road-house band sound that has characterized Van's last three albums. In contrast, the two longest cuts, "Listen to the Lion" and "Almost Independence Day," run 10 and 11 minutes respectively, and mark a welcome return to the meditative vitality of Astral Weeks. The coexistence of two styles on the same record turns out to be very refreshing; they complement each other by underscoring the remarkable versatility of Van's musical imagination.

As in Tupelo Honey, the mood here is one of celebration and expectation, but this time not in terms of a relationship within a particular setting. Above all, Saint Dominic's Preview invokes the possibility of profound self-revelation through being on the road and making music. Often there is a feeling of thrilling mystical presentiment. All this is expressed in such a dazzling variety of ways that at first listening Saint Dominic seems to be a less unified work than Tupelo or Astral Weeks. The point, however, is that Van is deliberately proclaiming his freedom from musical style or place (either the specific southern locale of Tupelo or the mythic arena of Astral Weeks.) Images of travel abound, adding up to a summons to high adventure–actual, imaginative, and musical.

The album opens with "Jackie Wilson Said (I'm in Heaven When You Smile)," a neat three-minute salute to soul then moves into "Gypsy," in which Van states where he's at artistically; the rhythms, alternating between double and triple time, are driving and excited, the harmonies faintly Middle Eastern, and the multiple guitar textures exotic. The song demonstrates that Van is precisely a musical gypsy–cryptic, sensual, and shrewd–a master at casting spells and at leading us through whatever territory he feels like exploring. While both cuts show off the band in its funky style, the third cut, "I Will Be There," goes the furthest of any into R&B-jazz; roots, as Van pays expert musical tribute to Count Basie and Joe Williams.

The excellence of these cuts isn't based on any major innovation, but on the homogenization of diverse but familiar ideas under the auspices of a single strong personality. But just as impressive as Van's personal stamp is the band's marvelous ensemble virtuosity. At the forefront of this evolving "roadhouse" sound are two saxophones (alternately played by Jack Schroer, Boots Houston, and Jules Broussard). The greater prominence of saxophone, plus the development of a more integrated and generally denser "band" sound in which Van's singing is somewhat laid back, mark the chief departures on these cuts from the sound of Tupelo.

Saint Dominic's Preview gets better as it goes along. The extended meditation, "Listen to the Lion," which closes side one, is magnificent. Here, as on much of Astral Weeks, the momentum is carried forward by incantatory rhythmic strumming (Van and Ronnie Montrose). But whereas the music on Astral Weeks was augmented by strings, "Listen to the Lion" uses subdued backup vocals (Montrose, Houston, and Van) to achieve the same hypnotic effect. The result is a purer but no less captivating sound than on Astral Weeks. Musically and lyrically, the cut builds slowly to an intense climax through the use of repeated short musical and lyrical phrases that gradually metamorphose without totally changing shape, and then subside, gradually surrendering tension like the release of a deep breath. Van begins: "Listen to the lion inside me." As the idea is developed it becomes, "and all my tears like water flow for the lion inside me," and ends, "and we sailed looking for a brand new start." As the song reaches peak intensity Van's singing becomes more and more gutteral until it is almost a feral muttering.

The six-and-a-half-minute title cut which opens side two nicely straddles the gap between the album's two styles. Instrumentally it is very similar to "Tupelo Honey." The arrangement and vocals are joyously full-bodied and enhanced by John McFee's steel guitar. However, the dense verbiage (more complex than on any other cut) is disjunctive and arcane, juxtaposing images of mythic travel, with those of social alienation, with reference to James Joyce and Northern Ireland. Within this deliberately obscure but provocative narrative recurs the refrain of Van's apocalyptic vision which he calls Saint Dominic's Preview. I was uneasy about Van's insistence on employing a basically private mythology in Astral Weeks, evocative as it was, and I am uneasy about "Saint Dominic's Preview" for the same reason. The words are difficult to follow, and the album provides no lyric sheet. Nevertheless Van achieves his effect–contrasting a restless, ominous perspective of the present with his certainty of a positive, perhaps ultimate resolution just ahead. The affirmation of "Saint Dominic's Preview" is translated to the past in "Redwood Tree," an ecstatic boyhood reminiscence centering on the image of a sheltering redwood tree. This beautiful, sensuous cut has the album's greatest potential as a hit single.

"Almost Independence Day," the ten-minute concluding cut, is a moving summation of what has preceded. Structurally akin to "Listen to the Lion," it duets Van and Ron Elliott on 12-string and 6-string guitar and effectively uses the Moog as a sort of foghorn bass. Grandly opening with references to the Stones' "Moonlight Mile," the body of the song is an incantatory montage of simple, portentous phrases repeated over and over with varying emotional emphasis: "I can hear the fireworks echoing up and down San Francisco Bay. I can see the boats in the harbor, lights shining out in a cool cool night. I can hear the fireworks. I can hear the people shouting out, up and down the line. And it's almost Independence Day, way up and down the line." As in "Listen to the Lion," the structure of the song is metamorphic, taking the form of a rising and subsiding wave. Music like this is so personal and private that you either relate to it or you don't. It can be faulted on so many grounds– formlessness, self-indulgence, monotony–by those who are unwilling to listen long and hard. For me, the deeply compelling quality of Van Morrison's trips is embodied in their very evanescence–in the fact that the forces he conjures are beyond precise articulation and can only be suggested. (RS 116)
by Stephen Holden,  Aug 31, 1972 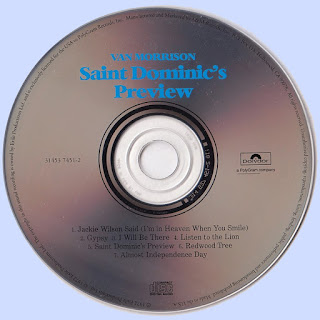 Free Text
Text Host
Posted by Marios at 11:11 AM No comments: