The Human Beast - Volume One (1970 uk, hypnotic and hard-driving with intense guitar workouts in a classic psych mould) 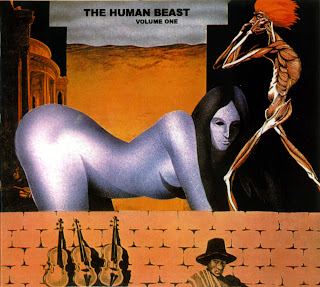 This was only album trio Human Beast Scotland (Edinburgh) recorded within 12 hours for Decca. This outstanding album had gone on the market and the team quickly ended his life. At the time when the LP is released, sold very poorly and today is a great rarity. The original UK pressing in perfect condition even have to pay around £ 1000. However, equally rare German pressing on Ebay price reaches 300-400 Euro.

In the 60s, Decca was one of the biggest record label, a true giant in the music industry. For them, the group recorded the Rolling Stones. Unfortunately, at the end of the decade Decca trying to keep up with the changes, signed the contract with whom they could, while not caring all about promotion and protection of their artistic performers. As a result, almost every band that recorded for the major label, was doomed to failure (clinical example is the band Genesis beginner).

It was no different with the Human Beast. Inexperienced musicians for recording disc which was a completely new challenge, not only that they got so little time to record, it still had to fight with Decca assigned to them by the manufacturer. Ray Horrics produced the music from the Eurovision, and a little earlier a few CDs folk guitarist Davy Graham. So, as the leader of the Human Beast memories, Gillies Buchan, a producer tried to soften sound rather heavy-rock trio, which fortunately he did not. Although the band as today claims that their recorded material, very disappointed.

Without adequate support and interest from the audience, shortly after Human Beast hiatus. Ok, it's possible that a group of young musicians on the recording of the lack of enthusiasm, but the fact is that so bungle the case, it could only Decca. On the other hand, well, that in general they all seemed paramount titles (often minimal). Thanks to this day remains witness the activities of these great artists. A future generations can enjoy these albums through various reissue.

Music hidden behind the very intriguing cover has something. It is very dark. Only that this gloomy atmosphere is not a calculated, calculated for effect. Creating the impression as if the group came as quite natural. Amazing as it used to rock groups could not and unnecessary pretense, make it dark atmosphere. Something unimaginable. The compositions of 'Volume One' raises associations with the image of hell as a place full of cold, lifeless void.

What a shame that the album takes 'mere' 34 minutes. But it is also the advantage of old records. Vinyl placed on music as much as he was able to accommodate a black circle. This was recorded on a single approach, during the twelve-hour session in December 1969, the album is one of the most interesting albums of heavy, psychedelic rock that was spent in the British Isles,album was released in November 1970, Decca effort.

In all the songs you can hear echoes of psychedelia expired already indicated, however, in a much harsher and dirtier. Seemingly only messy, though awkward, sexy. However, if you listen to the music carefully, it turns out that it was played in a very precise and well thought out. Groups without a doubt developed his own style, his individual approach to composition. So Human Beast music can be safely described as a fusion of heavy-rock with psychedelic playing.

Here heavily dominated by a combination of very interesting topics designed with exposed guitar with wah-wah effect and expressive bass guitar parts. Guitarist, Gillies Buchan, it sounds quite compelling is really great and the game in characteristic, hypnotic way. Equally surreal is the great voice of Ed Jones and also acting as a singer Buchan. A leading while the rhythm section is wonderfully unconventional rhythms insistent created by a very young musicians. Playing the drums, John Ramsay was recording an album at the time only 16 years old.

The album begins with a dynamic 'Mystic Man', but that is only hinted at what the best on the album, yet already shows a very good performance of the young drummer. It promises a unique record and play in a very distinctive style, a little dark and mysterious. After this introduction, it's time for calmer 'Appearance Is Everything, Style Is A Way Of Living', who seduces a great bass line. Then we get, sometimes wgniatający listener in an armchair, heavy 'Brush With The Midnight Butterfly'.

The main composer, but the group was on the Buchan was also a fantastic version of the song from the repertoire 'Maybe Someday' Incredible String Band. In the original, it's bouncy, folk song, while the Volume One turns it into a real masterpiece and is one of the few examples of the cover so far beyond the first performance. The band does not let the listener away from their music. The next on the 'Reality Presented As An Alternative' attention is drawn harsh riffs, playing like a dark and dense fog. Sixth on the album, instrumental 'Naked Breakfast' is another show of the rhythm section is an absolutely brilliant example of building tension in the music.

At the beginning so we played at a fast pace, like speeding, the main theme, but which suddenly slows down. Music becomes calmer. The rhythm section is slowly removed in the shade, while in the foreground a guitar that produces a difficult to describe the ominous, mysterious atmosphere. Played the guitar sounds grow until suddenly the whole team hits, like a knife in the heart wbijający. Gosh, how I love this moment. When I listen, I have before my eyes collapsing measure - with a touch of blue sky blazing sun disappears behind the clouds.

Closing album 'Circle Of The Night' is another masterpiece of rock music brings a gentle calm and clear vocals... Great melody was played in the majestic, dignified manner. Envelops the whole disturbing force. Especially in the chorus, where the guitar chords smashing hard, emphasizes singing voice inspired theme. Please also pay attention to the distorted, buzzing bass guitar in the background.

By all means great. Apparently doing this song, Gillies Buchan after an all-day session was already very tired voice. If so, it does not hear. On the contrary, the guitarist sings here as haunted, which only enhances the effect of strangeness. The author of the text of this composition was a friend of the group (and also recording for Decca) David McNiven - leader Bread, Love and Dreams. Version of 'Circle Of The Night' in the interpretation of the folk-rock group can be found on the album 'Amaryllis'.

I know, I write like mad. But otherwise I can not express their feelings about these sounds... I love it. That you just have to listen to the proper setting... the plate,I can recommend with a clear conscience to all fans of psychedelia and heavy sounds. For all who love the true unpretentiousness of British music from the late sixties record year will be a real discovery. For great music content comes as a great cover, one of the most interesting and most memorable of all the rock records released in the sixties and seventies. This next album which can not be ignored.
by Adamus67 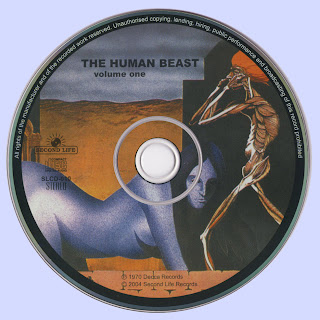