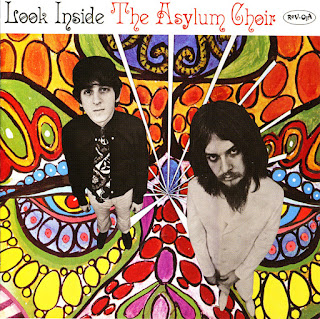 Long before Leon Russell became the albescent bearded high-priest of gritty rock’n’soul, he was a session musician in Phil Spector’s LA stable backing acts as diverse as The Byrds and Herb Alpert. Around this time Russell met the young Marc Benno, a talented blues guitarist just up from Austin, Texas who had moved to LA to also take up session work. Benno had been crashing in a closet at Russell’s place where a veritable who’s who of the 60’s rock scene would hang out and jam. It was here that Benno met Eric Clapton and many of the other famous musicians with whom he would collaborate later in his career. Benno described it as being “in the right place at the right time.” Russell and Benno decided to formally join forces as “Asylum Choir” and released the first of two LP’s in 1968, Look Inside the Asylum Choir, on the Smash imprint.

Look Inside the Asylum Choir rightly earns the oft overused label “psychedelic” for tracks such as “Icicle Star Tree” or “Death of the Flowers” which are psychedelic pop in the classical late 60’s sense, however musicians as diversely talented as Russell and Benno couldn’t help but include R&B, soul, ragtime and jazz elements along with numerous diegetic sound-bites and ironic lyrics into an eclectic musical collage that assumes a psychedelia of a higher order. The lofty words of 40+ years worth of hindsight don’t change the fact that the album was a commercial flop, despite favorable reviews from the groovy critics of the time. Perhaps the greatest commercial misstep was a marketing one: the album was originally released with a closeup photograph of a roll of toilet paper on the front cover. While perfectly in line with the deeply tongue-in-cheek lyrical irony of the album, the ablutional image offended the much more delicate sensibilities of the day.

It is this pervasive irony that both sets this album apart as a smart if gentle critique of the contemporary 60’s culture and dates much of the lyrical content. Despite this the album is quite enjoyable and musically delightful. The jaunty opener, “Welcome to Hollywood”, with its punchy horns and bouncy beat lyrically sticks a pin in Tinseltown’s balloon in jubilant vocal harmony. This is followed by the relatively straight honkey tonk ode to “Soul Food” and is a strong hint at the musical direction Russell would take later in his career. With the third track, “Icicle Star Tree”, the album takes a left turn into the sunshiny technicolor terain of psychedelic pop. The dreamy melody complete with abstruse and surreal lyrics floats over alternating cascades of shimmering keyboard and soulful telecaster for an overall heavily lysergic vibe. The album keeps this mood with the elegiac “Death of the Flowers” which tells the poignant story of Elaine “who is visibly moved by the death all around her…” The first side of the album closes with “Indian Style” that opens with a sound collage of tribal drumming eventually giving way to the sounds of cavalry, machine gun fire and war. This wordless statement abruptly ends as the upbeat honkey tonk song proper kicks in, evolving the initial statement with ironic lyrics about the mis-appropriation and commodification of indian culture by the flower children.

The second side opens with a six minute musical hodgepodge entitled “Episode Containing 3 Songs: N.Y. Op. Land of Dog Mr. Henri the Clown” that has a number of memorable moments such as a 30 second bit of “Mr. Henri the Clown” that is reminiscent of Beck’s “The New Pollution” off of Odelay, and witty lyrics about a flea who has a “little flea-osophy on organized insanity.” The heavy theme of the next track, “Thieves in the Choir”, is anticipated by the dolorous peal of church bells. The song warns of “Magic policemen who don’t need a reason to color your eye.” In deliberate contrast to this subject matter the song ironically borders on ebullient as Russell sings about how he “figured out, good guys with bullets are really quite bad.” The swinging blues closer “Black Sheep Boogaloo” rips it up pretty thoroughly, punctuated by Zappa/Beefheart-esque interludes of self-referential weirdness.

Despite its poor sales at the time, Inside the Asylum Choir remains an enjoyable listen both as a period piece and as an interesting insight into the future directions of two musicians of the highest caliber.
by Thom Klepach 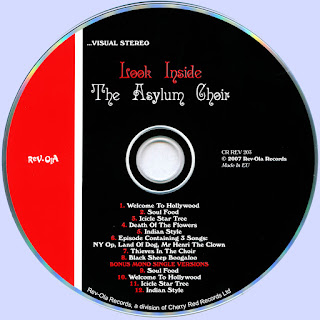 Free Text
the Free Text
Posted by Marios at 5:04 AM