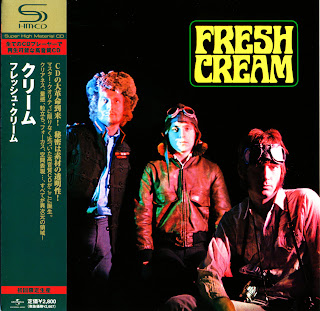 Laid down at the height of the UK blues boom, Fresh Cream covers the kind of territory you might expect from three of the most respected players on the scene at the time. With Clapton fresh just from his time with John Mayall, Ginger Baker leaving behind the R'n'B backwaters of Graham Bond Organisation, and a woefully under-employed Jack Bruce hightailing it from the increasingly pop-leaning Manfred Mann, the electric blues was their natural turf.

Highlights include the racing harmonica work-out, and the call and response excitements on Muddy Waters’ “Rollin’ and Tumblin,’” a spine-tingled vocal on the Willie Dixon classic, “Spoonful” as well as the self-penned “Sleepy Time Time” which gives Clapton a free hand to wake up all and sundry. The traditional standard, "Cat’s Squirrel" is given a rousing treatment, showing how well these players meshed. Only a particularly anaemic stroll through Robert Johnson’s “Four Until Late”, sounds like a side filler.

What lifts this album beyond the blues-tinged pigeon-hole are some superior pop songs brought along for the ride. It’s well-neigh impossible to hear the opening bars of “I Feel Free” without conjuring up images of dolly birds, hip young guys in new threads full of finger-clicking coolness hopping aboard one of those brand new Mini cars and soaring off for groovy times. Cultural cliché’s aside, given the amount of musical information that’s been packed into those two minutes and fifty-five seconds, it’s a wonder the thing doesn’t implode under the weight of its own inventiveness.

The rhythmic ambitions and ambiguity of “NSU” adds to the thrill, and if some of it doesn’t quite work as well as it should (Bruce’s dreary “Dreaming” is especially lame), “Sweet Wine” with its psyche-tinged lyrics and the heavy breakout offers a clear hint of what was to come. Overshadowed by its more famous successor (1967’s Disraeli Gears) and their reputation lengthy improvisations during which mighty civilisations would rise and fall, their debut captures one of those elusive moments in music when blues, pop and rock magically starts to coalesce to create something brand new.
by Sid Smith 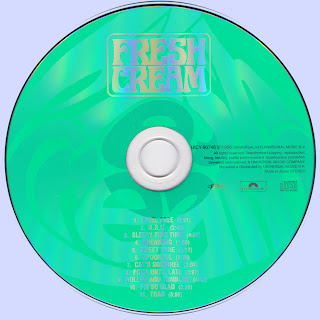 Free Text
the Free Text
Posted by Marios at 6:54 PM