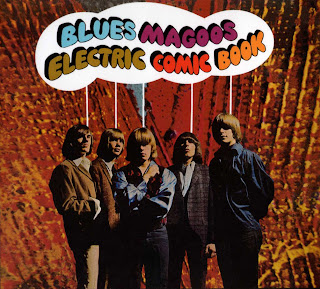 The Blues Magoos' second long-player, Electric Comic Book (1967), has been significantly expanded with ten 45 RPM-only titles otherwise unavailable on CD. The quintet was formed by Bronx, New York school chums Ralph Scala (keyboards), Ronnie Gilbert (bass) and Emil "Peppy" Thielheim (guitar).
They found Mike Esposito (lead guitar) -- who was several years older -- performing at the infamous Night Owl Café in Greenwich Village, and with him came the addition of Geoffrey Daking (drums). Their first album Psychedelic Lollipop (1966) yielded the Top Five punk/garage entry "We Ain't Got Nothin' Yet." While Electric Comic Book submits edgier rockers and strong acidic-tinged originals, the offering likewise infuses the Magoos' quirky wit.
Tracks such as the brisk yet agile "Life Is Just a Cher O' Bowlies" -- sporting deft fretwork from Esposito -- or the 'pause for the cause' "Intermission" practically define the light-hearted head humor of the era. The flip side of all the sonic chicanery are a few equally adept numbers, primarily the suitably trippy "There's a Chance We Can Make It," a ballsy proto-metallic "Rush Hour," the propulsive "Albert Common Is Dead" and a six-minute excursion on Van Morrison's "Gloria."
The supplements are arguably more fascinating than the feature presentation, especially for collectors who can retire their well-worn 45s. "So I'm Wrong and You Are Right" -- which is in stereo on the final cut of this anthology -- b/w "The People Had No Faces" represents the Magoos' debut single on the Verve/Forecast label. The tunes actually pre-date Psychedelic Lollipop, reflecting the folkie and authentic blues inherent in their Greenwich Village influences. Among the other extras are mono mixes of "Pipe Dream," "There's a Chance We Can Make It," "Summer Is the Man," "Life Is Just a Cher O' Bowlies," the far-out and suitably-named "Dante's Inferno," and a remix of "One by One."
The latter initially surfaced on Psychedelic Lollipop and was overhauled in a last-ditch effort to find a suitable follow-up to "We Ain't Got Nothin' Yet." Concluding the collection is a blue-eyed soul rave on the seasonal "Jingle Bells," which was b/w a comparatively off-the-cuff "Santa Claus Is Coming to Town." The eight-page liner notes contain an essay from Ugly Things fanzine guru Mike Stax. Plus, a four-panel replica of the coloring book insert/advert that came with early pressings of Electric Comic Book is also included.
by Lindsay Planer﻿ 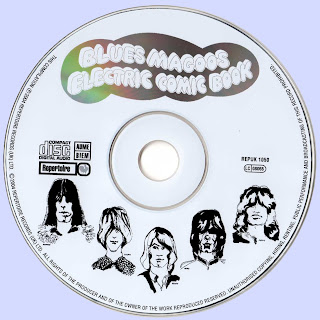