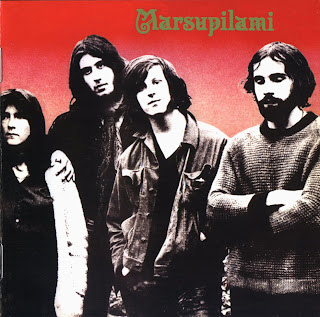 The band Marsupliami borrowed its name from the Belgian cartoonist André Franquin who created this comic character in 1952. Marsupilami was a cross between a monkey and a cat, yellow with black spots; cute, resourceful and anti-authority. Perhaps not an obvious choice, but the progenitors of the group, the Hasson brothers Fred (Vocals and Harmonica) and Leary (Organ), with their Anglo-French upbringing, had grown up with comic characters like Tin-Tin and Les Pieds Nicklés. Pre-empting Prince by several decades, the idea was to use the symbol rather than the name. When Transatlantic Record boss, Nat Joseph, wrote to seek permission, he neglected to mention this and so clearance was given for the name only. At that point a name change was suggested, but Nat Joseph said the name was cool and so it remained.
The idea for Marsupilami began in 1968 following a tour of Southern Spain, organised by Leary for his school r&b band, 'Levitation.' At the last minute Fred, who had sung in the school choir, was drafted in as a replacement for the absent lead singer. Returning to the UK the band secured a gig in its home town metropolis of Taunton, backing the Joe Cocker Band. Fred and Leary were completely smitten with what playing live offered but none of the other members of Levitation could make the commitment. The band had to reform going through numerous iterations, including a short period when a bassoon was featured.
The eventual line up for this eponymous first album was largely recruited through poaching musicians from local bands. The rhythm section of Mike Fouracre (drums) and Ricky Hicks (bass guitar) came from local blues outfit Justin's Timepiece and Dave Laverock (guitar) came from a semi-pro band, the Sabres. Leary's flute playing, art student girlfriend, Jessica Stanley Clarke (now Jecka McVicar, Britain's foremost organic herb grower) completed the line up.
Marsupilami were popular on the Continent and especially at Paradiso in Amsterdam and the AMVJ in Rotterdam. The band also appeared at the 1970 Hamburg Easter Festival alongside Alexis Corner, Chicken Shack and Renaissance. Waiting all day to play, the band finally went on at 5 a.m, only to have the plug pulled by the riot police 30 minutes into the set. This debacle guaranteed the band the first slot the next day - they brought the house down with the only music not written by them, a jam session of Spoonful - the finale of every Marsupilami set.
This first Marsupilami album (originally released at Transatlantic TRA 213) was recorded in June 1969 at the Sound Techniques Recording Studios, just off London's King's Road, and released in April 1970. The studio, which was converted from an old dairy and now replaced by flats, was just being fitted out with some new gizmo's called Dolby's. It is famous for the rosta of artists
recorded there by Joe Boyd: Nick Drake, Incredible String Band and Fairport Convention but Joe was reputedly not enamoured with the Marsupilami sound. The engineer was John Wood.
All five tracks were done in a handful of takes, virtually live. The music is really unique and distinctive; hard to categorise and never emulated. There are more sublime melodies packed into a single track than most bands of the period muster in an entire album. Time sequence changes, stylistic shifts and ruptures of mood follow one another: passages move from light jazzy ensembles, driving guitar and organ rock pumped up by the rhythm section, to slow ethereal dream sequences featuring flute, organ and chanting.
The content of the album can only be described as apocalyptic, even misanthropic at times and the titles penned by Dave (Facilis Descensus Averni [It's easy to go to Hell!] and The eagle chased the dove to its ruin) contain some especially gloomy lyrics to accompany the affecting guitar. The only instrumental on the album, Leary's Ab Initio ad Finem is a musical interpretation of an Old Testament style sermon, recounting man's demise through a recent cataclysm.
Marsupilami 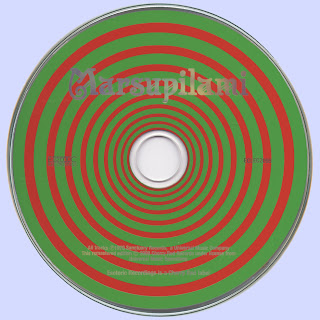