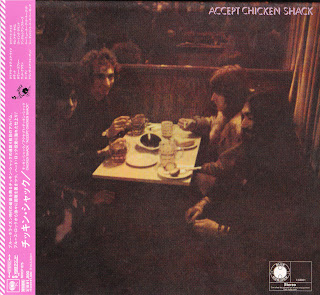 Chicken Shack was the product of eccentric guitarist Stan Webb, vetera of several R 'n' B outfits including the Blue 4, Sound Five and The Shades Of Blue. The latter active between 1964 and 1965 included Webb, Christin Perfect (Piano, Vocals) and Andy Silvester (Bass), as well the future Traffic saxophonost Chris Wood. Webb and Silvester formed the core of the original Chicken Shack, who enjoyed a lond residency at Hamburg's famed Star Club before returning to England in 1967.

Perfect then rejoined the line-up which was augmented by several drummers until the arrival of Londoner Dave Bidwell. Producer Mike Vernon then signed the quartet to his Blue Horizon Records label.

Their fourth and last album with Blue Horizon, and the last with Paul Raymond, Andy Silvester and Dave Bidwell was Accept, released in July 1970. It certainly showed a further marked change in style, probably reflecting the fact that quite a few of the tracks were joint Webb/Raymond compositions.  Interestingly Blue Horizon publicity material for Accept ran the slogan "If you think Chicken Shack just plays the blues you haven't been paying attention." 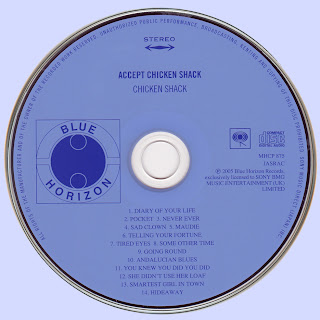