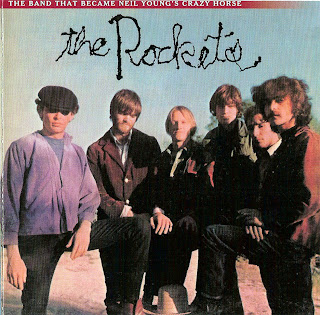 It's easy to see why The Rockets attracted Neil Young's attention. Listen to "Let Me Go," Danny Whithen's ambling blues/rock shuffle that appears five songs into this CD. Over a deceptively simple and hypnotic rhythm, Whithen's electric guitar begins a slow but determined build, erupting into fits and snarls and showers of sparks, never turning lo speed riffs but relying instead on the pulse and amplified grit of two or three notes.

Neil Young's distinctive electric sound is, of course, a variation on this approach; it first caught the public's car on 1969's Everybody Knows This Is Nowhere album, on which Young exchanged this kind of staccato, rapid-fire note-play with Danny Whitten. By then, The Rockets had become Crazy Horse, and the chemistry that developed between the band members and Neil Young has served them well for more than three decades. Long may they run. The Rockets was released in 1968 on While Whale Records, the Los Angeles label that had turned the world on to The Turtles and "Happy Together."

Four years earlier, Danny Whitten (guitar/vocals) and Billy Talbot (bass/vocals), as Danny & the Memories, had released a single called "Can't Help Loving That Girl Of Mine," but it hadn't clicked. Drummer Ralph Molina joined in '66, and the band re-located to San Francisco, where the gigs were good, and where their ranks swelled with the addition of guitarist brothers George and Leon Whitsell. On the spur of the moment, Talbot invited classical violinist Bobby Notkoff, who'd never played rock V roll but was eager to learn, to join the band. Complete, they headed back to L-A. to find their fortunes.

Neil Young, no surprise, was one of their biggest fans, and enjoyed jamming with the band when he wasn't on the road or in the studio with Buffalo Springfield. Barry Goldberg, the organist in The Eleclric Flag, was recruited to produce The Rockets at Paramount Recording. He quickly discovered that the key lo The Rockets was letting them find their groove, which, contrary to the heaviest rock of the day, was often understated — as much about the spaces in between the notes as the notes themselves.

The band showed solid potential. With Whitten's material taking up the whole of side one on the original album, and Leon Whitsell's fierce psychedelic blues on side two (check out the gritty "Pills Blues," a high point of the band's live show), The Rockets might have soared. But fate had other plans for them. Neil Young wanted a road band, and after Everybody Knows This Is Nowhere — on which he'd employed Whithen, Talbot, Molina and (on one song) Notkoff— he wanted them. And he wouldn't take no for an answer.

The Rockets wasn't exactly tearing up the charts, so with the others' blessings, Danny, Billy and Ralph rode off into history as threequarters of Neil Young & Crazy Horse. Danny Whitlen died in 1972, at age 29, a casualty of the needle and the damage done. George Whitscll briefly took up the guitar chair in Crazy Horse, until Frank "Pancho" Sampedro joined in '75. The Rockets is a great little record, an embryonic peek into what was to come — and, in the case of Danny Whitten, a bittersweet reminder of what might have been.
by Bill DeYoung 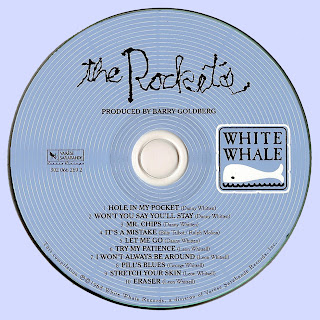 Free Text
Text Host
Posted by Marios at 5:53 AM