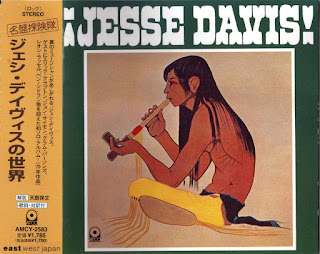 While Jesse Ed Davis’ legacy has finally started to see the light of recognition, there is still a long way to go in establishing his rightful place in the pantheon of rock and roll legends. The Kiowa guitarist’s career encompassed work with everyone from Conway Twitty to John Lee Hooker to Bob Dylan, and his time served in the original Taj Mahal band would be highly influential on up-and-coming guitar slingers like Duane Allman (he being the inspiration for the latter’s taking up bottleneck-style guitar in the first place). Davis never really managed to establish himself as a commercially successful singer in his own right, but that did not prevent him from cutting a series of strong and invigorating records in the early 1970s, the first and foremost of these being Jesse Davis.

Davis has surrounded himself with a real who’s-who of rock and roll musicians here, including Eric Clapton, Joel Scott Hill, Gram Parsons and the oddly-omnipresent Leon Russell. This is a hearty American brew; it’s only too bad that the liner notes do not include a track by track breakdown of who is playing what on which songs. Davis’ voice may be an acquired taste – being slightly nasally and, yes, sometimes a little pitchy – but it also has a lot of character, and its hard not to give the guy a break; in the end, whatever vocal limitations the cat may be accused of are more than made up for by his exemplary musicianship.

In his guitar playing I have noticed that Davis exhibits a certain degree of Curtis Mayfield influence (similar to that of Woodstock-era Robbie Robertson) in his ability to always serve the song and the rhythm; that is, until it comes time to let loose into a sharp and jagged solo, such as that which leaps out from the end of the otherwise lethargic “Reno Street Incident” – an original composition which was also recorded by Southwind’s Jim Pulte. The expansive horn arrangement on “Every Day Is Saturday Night” falls somewhere between Memphis boogie-woogie and red dirt dixieland, with Davis’ sharp staccato guitar leaping and swerving through the collective improvisation until its gleeful collapse. Make a joyful noise, indeed.

Perhaps the most memorable number here is “You Belladonna You,” which not only manages to lock into a serious groove, but also boasts an inescapable vocal hook. The extended jam at the end is the reason I harbor such ill will towards “the fade-out” on rock and roll records: is this not where the real magic happens? On the other hand, the oddest moment on the record comes with “Golden Sun Goddess,” which is an uncharacteristic detour into Los Angeles yacht rock replete with groovy electric sitars and a lava lamp vocal choir. It sounds like the album’s closest thing to a hit single, though its Steely Dan-isms are pretty jarring.

Pretty much everywhere else Davis leans on an earthy, deadpan charm that betrays his deep Oklahoma roots. “Redheaded woman wants me to get a haircut,” Davis grumbles at the end of Pamela Polland’s “Tulsa County” before cracking, “man, I can’t get no haircut. Redhead? That’s a redneck.” Alright, so the Byrds may have cut the definitive take on this one, but they never let themselves have this much fun in the studio. Davis may be criticized for relying so heavily on other people’s material for his own albums, but his takes on these songs are always individualistic, and anyways, the guy’s got some good taste.

Jesse Davis has been reissued both individually and as a set with the follow up release, 1972’s Ululu, but somehow both are currently out-of-print and demanding ridiculously high prices. Your best bet is to keep an eye out for some original vinyl or else sucking it up and purchasing a digital copy, which may in fact be the most affordable choice at the moment though it does entail missing out on the righteous jacket artwork.
by Nik Rayne 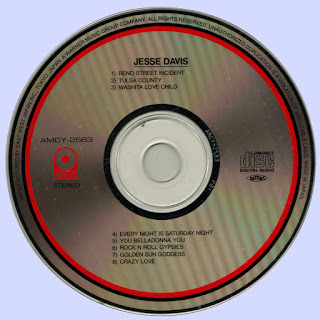 Free Text
Text Host
Posted by Marios at 7:04 AM