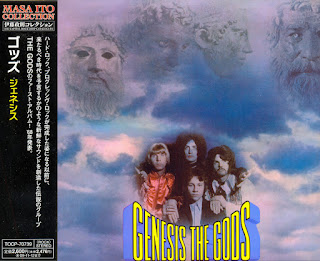 After leaving Stevenage based R'n'B outfit The Jimmy Brown Sound in early 1965 keyboardist / guitarist / vocalist Ken Hensley formed The Gods with Mick Taylor (guitar), John Glasscock (bass / vocals) and Brian Glasscock (drums). However this line up only lasted until June 1967 when Taylor quit to join John Mayalls Bluesbreakers and then The Rolling Stones. Hensley then moved to Hampshire where, whilst living in a van(!), he met up with bassist Paul Newton and put together a new version of The Gods which featured Hensley, Newton, drummer Lee Kerslake and guitarist John Konas. However despite building up a good following on the South Coast collage circuit Newton left (he later became a founding member of Uriah Heep) and was replaced by Greg Lake. With a residency at Londons Marquee and a contract with EMI's Columbia label it looked like The Gods would at last release something but, as Hensley recalls, "Just as we were about to start recording we had a falling out with Greg. The main problem was that he was far too talented to be kept in the background.".

With Lake leaving in the summer of 1968 to form King Crimson (and later Emmerson Lake And Palmer) John Glasscock returned to the line up and the band released the album "Genesis" (SCX 6286), now an £ 85 collectors item, and the single "Baby Rich" / " Somewhere In The Steet" (DB 8486) all recorded on a four track studio. This was followed by the singles "Hey! Bulldog" / "Real Love Guaranteed" (DB 8544) and "Maria" (from "West Side Story") / "Long Time Sad Time Bad Time" (DB 8572) both released in 1969 though by the time the bands second LP "To Sammuel A Son" (SCX 6372) was released at the end of the year The Gods had long since ceased to exist. In fact they had become the band Toe Fat backing ex-Rebel Rouser Cliff Bennett and appeared on one self titled LP released on Parlophone.

Following this Ken Hensley became a founding member of Uriah Heep when again he teamed up with Paul Newton. He also released three solo LPs ("Proud Words On A Dusty Shelf", "Eager To Please" and "Free Spirit") as well as working with the likes of Blackfoot and Ozzy Osbourne. Kerslake, after a short spell with the National Head Band, also joined Uriah Heep whilst John Glasscock later worked with Chicken Shack, Carmen and Jethro Tull whilst Konos quit the playing side to run a music shop in Ontario, Canada.
by Mark Brennan 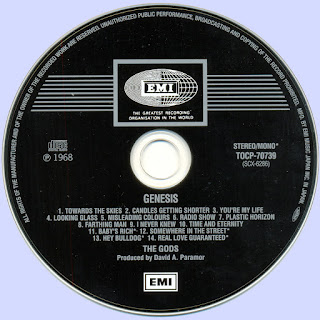 Free Text
Text Host
Posted by Marios at 10:35 AM