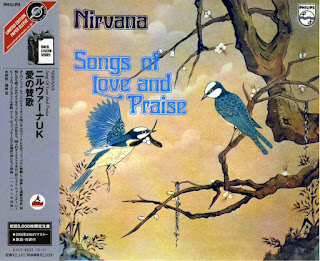 By the time of Local Anasthetic (1971), Nirvana was just Campbell-Lyons and session players, Spyropoulos leaving to pursue a solo career. Campbell-Lyons recorded and released a second, once again essentially solo, album under the Nirvana name, Songs of Love and Praise. The album failed to sell, and neither of two singles achieved much in the way of airplay or sales action. He worked for Vertigo as an A&R man and producer at the same time, handling some of their more minor acquisitions, the most impressive of which may well have been Dr. Z, while Mike Absalom was certainly the most obscure.
by Steven McDonald

“Songs Of Love And Praise“ contained re-recordings of “Rainbow Chaser“ and “Pentecost Hotel“, along with some fine new material, notably “Please Believe Me“,“I Need Your Love Tonight“ and “Stadium“, which were all written by Campbell-Lyons. On this and all Nirvana albums, he was assisted by a flexible group of close friends
Alex-Gitlin 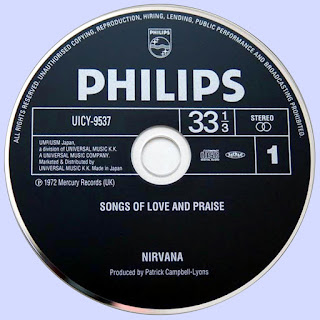