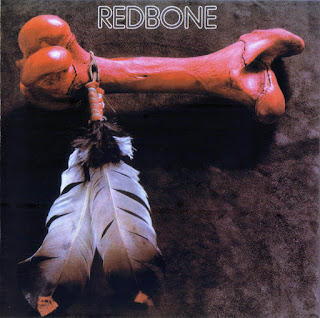 Redbone's story is interesting from more then one point of view. The band itself of course, who had a great career, with ups and downs. The fact that the musicians were all native americans from different origins (Cherokee, Yaquis, Apaches and Shoshones...). Their political implication and the fact their were censored that shows a very interesting political and social background of the US nation. All this plus the fact that they produced a unique, powerfull and soulfull music !

Lolly and Pat Vegas were well-known musicians in the rock and jazz "milieu"in Los Angeles during the sixties. Candido Albelando Vasquez (Lolly Vegas) and Patrick Morales Vasquez (Pat Vegas) were born in Fresno, California. The brothers were of mixed Yaqui/Shoshone and mexican descent. Very early the singing/guitar playing brothers began their musical careers backing and touring with Jimmy Clanton of "Just A Dream" fame. In 1961 the brothers relocated to Los Angeles.

The brothers played with Canadian jazz pianist Oscar Peterson at the Monterey Jazz and Pop Festival before relocating to Los Angeles in 1963. Calling themselves the Avantis, the brothers attempted to cash in on the surf craze popularized by Jan and Dean and the Beach Boys, with such songs as "Gypsy Surfer" and "Wax 'em Down" on the Chancellor label, and "The Phantom Surfer" on the Regency label. The Avantis featured future Beach Boy drummer Mike Kowalski, and their recordings earned them an opening slot on a Beach Boys' tour.

The Vasquez brothers also recorded the singles "Let's Go" as the Routers, "Surf Stomp" and "Batman" as the Mar-kets, and "Hotrodders' Choice," "Dawn Patrol," "Double A Fueller," and "Satan's Chariot" as the Deuce Coupes. The 1963 Deuce Coupes' sessions featured impressive session help from Glen Campbell, David Gates, and Leon Russell.

They then meet manager/producer Bumps Blackwell who suggest they change their names to Pat & Lolly Vegas. In 1963, Pat & Volly Vegas recorded "Boom, Boom, Boom" and "Two Figures" for the Reprise label (Reprise 20199).

Bumps Blackwell helped the brothers become the house band at Los Angeles' The Haunted House. In 1966, produced by Leon Russell and Snuff Garrett they would record an album for Mercury entitled "Pat & Lolly Vegas At the Haunted House"

While fulfilling a residency at a Los Angeles nightclub named Gazzarri's, the Vegas brothers met guitarist Tony Bellamy. A Yaqui Indian who had performed with Dobie Gray, and a member of Peter and the Wolves (a San Francisco band that evolved into the psychedelic band Moby Grape), Bellamy had grown up in a family of dancers and musicians. He had learned to play flamenco guitar as part of his musical education as well, and he was recruited by the Vegas brothers to accompany them on session work with Odetta, John Lee Hooker, and the Everly Brothers.

According to Pat, it was Jimi Hendrix who talked the musicians into forming an all-Native American rock group. Vegas told Record Collector writer Jeremy Isaac, "Hendrix was a friend of ours.... and he was half Indian. Once he knew that we were Indian too he used to come and hang with us because of that. Jimi made me aware of my roots: He'd say 'Native American is beautiful, man, be proud of that.'"

Signed to CBS's Epic subsidiary in 1969, the band took its name from the Cajun epithet "Rehbon", meaning half-breed, and its self-titled debut album Redbone, released in 1970, was an extraordinary affair. Think of it: an unknown band producing its first record and releasing a double album. Redbone played primarily rock music with R&B, Cajun, Jazz, tribal, and Latin roots. This first album was released as a double album in North America. In Europe it was released both as a double (EPC 67242) and as a single album (BN 26280) on the Epic label.

Lolly was one of the first guitarists to make extensive use of the distinctive Leslie rotating speaker effect in his electric guitar amplification set-up. Vegas played improvised, jazz-influenced guitar. Drummer Peter DePoe (born 1943, Neah Bay, Washington) is credited with pioneering the "King Kong" style of drumming, which features sharply accented polyrhythms involving the bass and snare drums and is similar to funk styles of drumming. The band referred to DePoe's "King Kong Beat" in their lyrics to the song "Prehistoric Rhythm" on their debut album. Pat Vegas' style of bass playing is still coveted by bass players in the world, even taught in college courses of music. The level of creativity each member held on his own instrument added to the power of the band.
Redbone-Official 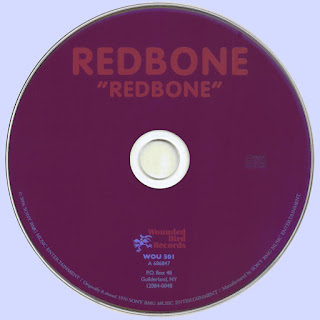