Blodwyn Pig - Getting To This (1970 uk, remarkable hard blues rock with jazz flashes) 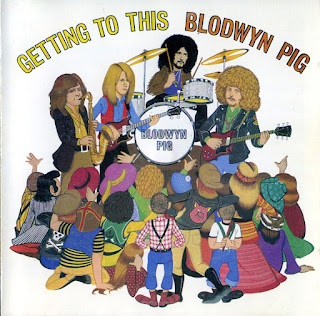 Getting To This, Blodwyn Pig's second opus, features Mick Abrahams (formerly of Jethro Tull) meeting acid and fusing it with his unique blues style. This album also shows the band as having a reflective side, thus creating the epic "San Francisco Sketches", and single handedly creating prog rock (no, it wasn't King Crimson folks!)

The album starts with the down-to-earth blues/rock-fest of "Drive Me", boasting a brilliant sax solo which starts off sounding like mighty guitar feedback, laid down by the sadly unheard of Jack Lancaster. (In fact, Blodwyn Pig as a whole is largely unheard of...).

The second track, "Variations on Nainos", whatever the hell that means, is a flute driven psychedelic slice of strangeness, the last verse sung sounding as if the band were drowning in a bath. The next song, "See My Way" is in the same vein as MC5, but slightly more sedate and with crushing sax and drum work. "Long Bomb Blues" is a hilarious 1 minute ditty all about Mick Abrahams getting drunk and hauled over by the cops. His wife beats him upon his return.

The aforementioned "San Francisco Sketches"...THE 4-part prog track. Opening with the beautifully reflective 'Beach Scape', it really makes your mind float out to cosmic realms. The second part, 'Fisherman's Wharf' is a jazzy swagger, featuring saxophonist Jack Lancaster pulling out all the stops. We return to tranquillity in part three, 'Telegraph Hill', mellow and cool. This is ripped apart and laid waste to by the final chunk, the slow and sludgy saxophonic cacophony 'Close The Door, I'm Falling Out Of The Room'...this is one of the darkest, most gruelling pieces I've ever heard.

The heavy overtones are retained in the next track, "Worry", a mighty guitar fuelled anger stomp with haunting vocal work. This is followed by the slightly stupid and twee "Toys", a song about a small boy's toys telling him to love them right...

We find ourselves back in hilarity land with "To Rassman", a bluesy-reggae song that almost mocks the early reggae movement of the late 60's in the UK. And what a brilliant comical Rasta accent by Mick!

The last (original Vinyl) track truly is a crushing blow to the politicians running the insanely pointless Vietnamese war..."Send Your Son To Die"...even the title sums up the song's message. This is perhaps the angriest Anti-Nam song ever, with the exception of Black Sabbath's classic "War Pigs". Ron Berg is sure as hell not taking any prisoners with his thunderous drumming on this storming riff-fest.

Finally the 2 bonus tracks here on this release, these two tracks were apparently featured on the US edition Pig's debut "Ahead Rings Out". The first of these two tracks is "Summer Day" a truly masterfully-crafted blues song, with one of the most complicated riffs I've tried to play! The time changes on this are incredible!! The last is the laid back "Walk On Water", which opens with a single acoustic guitar and then ends up in a massive jazz-rock-psychedelic breakdown.
by Matt Ainsworth 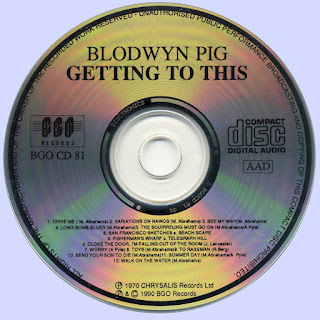 Free Text
Text Host
Posted by Marios at 9:54 AM