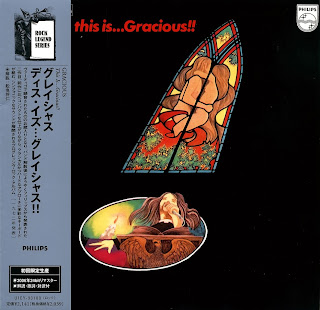 No sophomore jinx here: on their second album, Gracious truly hits its stride. The first half of the album is a four-part suite, "Super Nova." After its Floydian opening instrumental, the band launches into the bleak "Blood Red Sun"; with a dystopic narrative of environmental holocaust and its martial drumbeat, it's an ideal complement to King Crimson's "21st Century Schizoid Man."

Strange, then, that this should lead to "Say Goodbye to Love," an effectively weepy guitar ballad of lost romance and tear-jerking harmonies. It's on the second half of the album, though, that Gracious hits escape velocity. On "C.B.S." the band shifts effortlessly from a groovy clavinet jam to a bouncing barrelhouse piano in the verse. "Blue Skies and Alibis" is a prime example of Martin Kitcat's Mellotron technique; powered along by Cowderoy's graceful guitar, smoky vocals, and a lush piano progression worthy of Joe Jackson, it's one of their most enduring tracks.

A truly undervalued gem, This Is... Gracious! sat on the shelves for two years after completion before being issued; it's a shame that it was to be last anyone heard from the band for the next two decades.
by Paul Collins 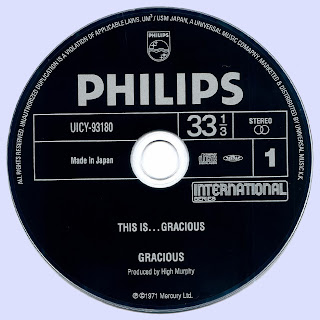 Free Text
Posted by Marios at 3:02 AM