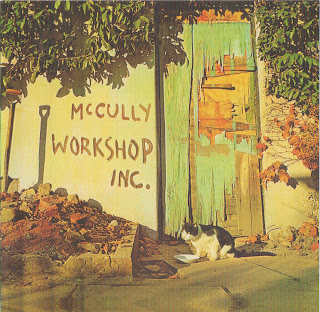 The McCullagh brothers, Tully (born Terence on 31st May 1953) and Mike (born Michael on 7th April 1947), have been an integral part of the South African music scene for five decades now.

In 1965 they started as a folk-rock trio with Richard Hyam and called themselves the Blue Three. Richard had been in a folk duo, Tiny Folk, with his sister Melanie. After a few personnel- and name-changes, like The Blue Beats and Larfing Stocke, the line-up settled down (for a while) in 1969.

“I had my own studio in the garage since I was 12” remembers Tully. It was a single garage in the garden of their home in Plumstead, in the Southern Suburbs of Cape Town. The brothers’ father, radio personality Michael Drin (his stage name), painted the name “McCully Workshop, Inc.” on the garage wall. “McCully” was an easier-to-spell version of McCullagh and the “Inc.” was a tongue-in-cheek addition.

A photo of the garage was used as the album cover. The photo was taken by Sigurd Olivier from the Argus newspaper. The cat’s name was Sirikit.

“We had been playing music for 6 years” remembers Mike McCullagh. “In 1969 I was 22 and Tully was 16, along with Richard Hyam, his sister Melanie and Allan Faull the group started.”

“We all wrote our own songs”, continues Mike, “and we just took the best ones for the album. Tully wrote ‘Why Can’t It Rain’ in the middle of the night and this became a hit single putting McCully Workshop on the charts for the first time.” This song went to number 12 on the Springbok Radio charts in July 1970 and also reached number 13 on the LM Radio charts.

“Why Can’t It Rain” drew the attention of the Gallo label, and they said they wanted an album. McCully Workshop signed probably the first independent licencing deal with a major label in South Africa.

Billy Forrest (born William Boardman in Kimberley in 1940) was the “top guy” at the time and was appointed as producer. He had recently had chart success with The Staccatos ‘Cry To Me’ and many others including The Dream Merchants and Quentin E Klopjaeger (one of his many pseudonyms).

Tully remembers Forrest’s catchphrase at the time was “could happen”.

The “Inc.” album shows a variety of styles and influences including The Beatles, Frank Zappa and Pink Floyd. “’Sgt Pepper’ was very important, as were the pop charts at the time”, recalls Tully.

Another big influence, according to Tully, was The Moody Blues ‘Threshold Of A Dream’ which was released in April 1969. Echoes of Graeme Edge’s poems can be heard in Mike McCully’s spoken words during the moonlanding-inspired ‘Head For The Moon’.

Alan van Der Merwe was a music teacher friend of Mike’s and was responsible for the vocal harmony arrangements. Tully cites South African band ‘The Sandpipers’ as an inspiration. This folk quartet, which consisted of two girls and two guys, and not be confused with the US folk trio, released an album titled ‘A Bird in Hand’ in 1967.

When asked to name his favourite song on the ‘Inc.’ album besides ‘Why Can’t It Rain’, Tully says without hesitation, ‘The Circus’. This song is an uptempo psychedelic pop-rocker with strong vocal harmonies, distorted guitar sounds from Allan Faull and great flute playing from Ian Smith.

The sessions were done, but another song was needed to complete the album, so a studio jam called ‘Jackin’ Around’ was added. Great organ sounds from Glenda Wassman, and a drum solo play-out from Mike McCully.

Glenda Wassman later married Richard, and they formed the pop band Pendulum and had a big hit with ‘Take My Heart’ in 1976. Glenda then went on to major success worldwide with the all-girl group, Clout, who had a huge hit with ‘Substitute’ which went to number 2 in the UK in 1978.

Asked about an interesting studio story, Tully remembers feeling a few tremors and stuff falling off the walls one day during recording. “Everybody got a fright and rushed outside”, says Tully, “we thought it was a passing train.” Turned out to be the Tulbagh earthquake of 29th September 1969.

McCully Workshop, with the McCullagh brothers always at the core, have released a number of albums over the years and of course are best known for their big hit ‘Buccaneer’ from 1977.

40 years after those first recording sessions in late 1969, Tully is still involved in recording and runs his successful Spaced-Out Sounds Studio in Cape Town. Mike regularly packs out concert halls with his various nostalgic revue shows including ‘Sixty Something’, ‘Station 70′, ‘Music Of The Millennium’, ‘Country Classics’ and many, many others.

McCully Workshop still perform live on occasion and their first hit ‘Why Can’t It Rain’ is almost always included in the setlist. 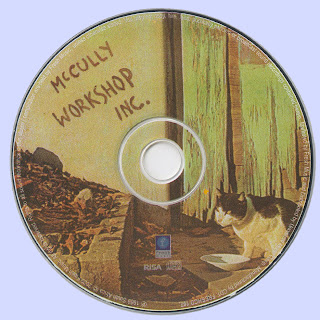