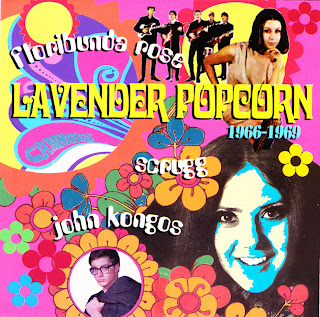 Floribunda Rose were the group formed by John Kongos -- who scored two British Top Five hits in the early 1970s, with "He's Gonna Step on You Again" and "Tokoloshe Man" -- in 1967. Kongos had been a recording artist in South Africa since he was a teenager in the early '60s, and in 1966 moved to England, where he recorded a solo single for Piccadilly. Soon after that he was at the head of Floribunda Rose on guitar and vocals, the lineup fleshed out by singer-guitarist Pete Clifford (who at one time had been in Dusty Springfield's backing band), organist Chris Dee, drummer Nick "Doc" Doktor, and singer-bassist Jack Russell. Despite the weird group name, Floribunda Rose's sole single, the 1967 Pye release "One Way Street"/"Linda Loves Linda," wasn't out-and-out psychedelia.

It was rather twee period pop/rock with a whiff of psychedelic influence, "One Way Street" sounding, at times, like Monkees-influenced British freakbeat, "Linda Loves Linda" being a tamer ode for a self-absorbed flower child. The single flopped, and by 1968 the group, still recording for Pye, changed their name to Scrugg and made three more little-noticed singles, highlighted by the more convincingly psychedelic 45 "Everyone Can See"/"I Wish I Was Five."

Both sides of the Floribunda Rose single -- as well as both sides of Kongos' 1966 Piccadilly single, everything from the three Scrugg singles, the entirety of Kongos' 1969 LP Confusions About a Goldfish, and a few unreleased songs by Kongos and Scrugg from the same era -- are here, on the anthology Lavender Popcorn which digs deep into the discography of eccentric psych-pop musician John Kongos. Prior to the period documented here, Kongos had several records under his belt as a South African artist, which were popular there but failed to translate elsewhere. Upon his 1966 relocation to England, he headed the short-lived bands Floribunda Rose (one single) and Scrugg (three singles) and then went solo.

This anthology ties up everything from Floribunda Rose and Scrugg, while adding some unreleased material. Kongos' first solo album, 1969's Confusions About a Goldfish, is also included in its entirety. Though it doesn't include significant later singles like "Tokoloshe Man" and "He's Gonna Step on You Again," the disc is rather essential for psych-pop completists.
by Richie Unterberger and Andy Kellman 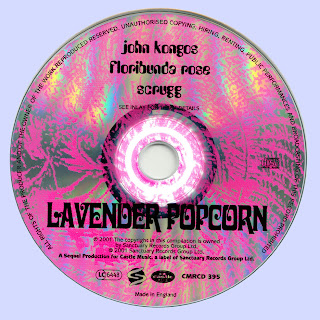