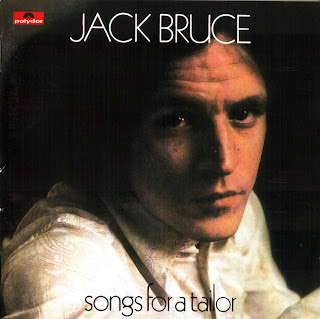 With a live version of "Crossroads" going Top 30 for Cream, Songs for a Tailor was released in 1969, showing many more sides of Jack Bruce. George Harrison (again using his L'Angelo Misterioso moniker) appears on the first track, "Never Tell Your Mother She's Out of Tune," though his guitar is not as prominent as the performance on "Badge."

The song is bass heavy with Colosseum members Dick Heckstall-Smith and Jon Hiseman providing a different flavor to what Bruce fans had become accustomed to. Hiseman drums on eight of the ten compositions, including "Theme From an Imaginary Western," the second track, and Jack Bruce's greatest hit that never charted. With "just" Chris Spedding on guitar and Jon Hiseman on drums, Bruce paints a masterpiece performing the bass, piano, organ, and vocals. The song is so significant it was covered by Mountain, Colosseum, and a Colosseum spin-off, Greenslade.

One has to keep in mind that the influential Blind Faith album was being recorded this same year (and according to the late Jimmy Miller, producer of that disc, Jack Bruce filled in for Rick Grech on some of the Blind Faith material). Bruce's omnipresence on the charts and in the studio gives the diversity on Songs for a Tailor that much more intrigue. "Tickets to Water Falls" and "Weird of Hermiston" feature the Hiseman/Spedding/Bruce trio, and though the wild abandon of Ginger Baker is replaced by Hiseman's jazz undercurrents, these are still basically two- to three-and-a-half-minute songs, not as extended as the material on Bruce's work on his John McLaughlin/Heckstall-Smith/Hiseman disc Things We Like recorded a year before this, but released two years after Songs for a Tailor in 1971. The history is important because this album is one of the most unique fusions of jazz with pop and contains less emphasis on the blues, a genre so essential to Bruce's career.

Indeed, "Theme From an Imaginary Western" is total pop. It is to Jack Bruce what "Midnight Rider" is to Greg Allman, a real defining moment. "Rope Ladder to the Moon" has that refreshing sparkle found on "Tickets to Water Falls" and "Weird of Hermiston," but Bruce has only John Marshall on drums and producer Felix Pappalardi adding some vocals while he provides cellos, vocals, guitar, piano, and bass. Side two goes back to the thick progressive sound of the first track on side one, and has a lot in common with another important album from this year, Janis Joplin's I Got Dem Ol' Kozmic Blues Again Mama!

Jack Bruce and Janis Joplin were two of the most familiar superstar voices on radio performing hard blues-pop. Joplin added horns to augment her expression the same time Jack Bruce was mixing saxes and trumpets to three tracks of this jazz/pop exploration. "He the Richmond" deviates from that, throwing a curve with Bruce on acoustic guitar, Pappalardi on percussion, and Marshall slipping in again on drums. But the short one minute and 44 second "Boston Ball Game, 1967" proves the point about the pop/jazz fusion succinctly and is a nice little burst of creativity.

"To Isengard" has Chris Spedding, Felix Pappalardi, and Jack Bruce on acoustic guitars, a dreamy folk tune until Hiseman's drums kick in on some freeform journey, Spedding's guitar sounding more like the group Roxy Music, which he would eventually join as a sideman, over the total jazz of the bass and drums. "The Clearout" has Spedding, Hiseman, and Bruce end the album with progressive pop slightly different from the other recordings here. As with 1971's Harmony Row, Peter Brown composed all the lyrics on Songs for a Tailor with Jack Bruce writing the music. A lyric sheet is enclosed and displays the serious nature of this project. It is picture perfect in construction, performance, and presentation.
by Joe Viglione 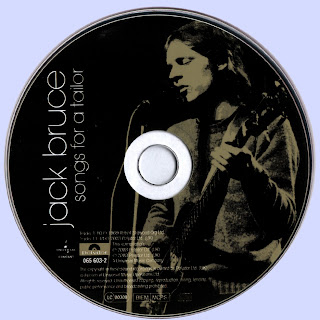