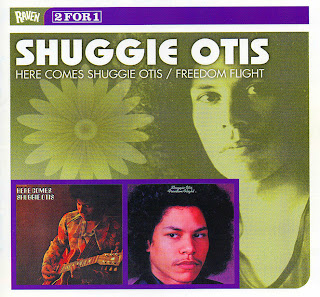 While listening to these tracks it s important to keep in mind that the music reflects not only Shuggie's self taught mastery of so many instruments, his abilities as an arranger for strings and horns, his composing capabilities and an innate gift for seamlessly blending funk, rock. pop. jazz and R’n’B into his own sound, but also that he was just 15 when the first of these sessions was recorded.

His debut album Here Comes... is, not unexpectedly, more tentative than its follow up, as evidenced by Johnny Snr's previously mentioned contributions. What these tracks reveal conclusively is Shuggies musical skills as an improvising instrumentalist, in particular as a guitarist who never bowed to speed or technical trickery when imagination and feel arc obviously that for which he was striving.

The seven-minute instrumental Oxford Cray provides a spectacular introduction to the fertile musical mind of Shuggie Otis. The arrangement allows for his soulful electric guitar to spar with organ and harpsichord, before an orchestral swell of pizzicato strings and brass subsides to unveil a lovely acoustic bottleneck solo. The track concludes with more strings and electric guitar. Jennie Let is graced by Shuggies gentle vocals, Rootle Cooler is a funky instrumental featuring guitar and organ, and Knowing (That You Want Him), written by his dad, is blatant erring-laden pop and a potential #1 single I had it found its way to Bobby Vee.

Meanwhile, the knowingly titled Funky Thither allows for organ, piano and guitar interplay. Shuggie’s Boogie opens with him reminiscing about some of his earliest influences - guitarists Jimmy Nolan, Pete Lewis and Mel Brown who played in his lather's band. He pays tribute to B.B. King, Elmore James, T Bone Walker and the other blues masters from whom he's borrowed and goes on to reveal how he wore dark glasses and a painted-on moustache when playing bars while under age in his lather's band. The track then moves into an up-tempo blues workout, with Shuggie's guitar playing revealing an amazing maturity.

Hurricane could have been in James Brown's repertoire (riffing horns, punctuated by organ and guitar). Gospel Groove is actually a slow blues with Shuggie soloing Throughout over a sanctified piano and organ. Baby I Need You shines with an Al Kooper-like vocal and cruising organ/guitar arrangement. A final instrumental. the Hawks, suggesting a warm-up song from the band before B.B. King hits the stage, concludes one of the most impressive debuts of its era.

Shuggie's second album. Freedom Flight, released the following year (1971) finds the young musician confident enough to handle all the arranging and most of the song writing, leaving dad to concentrate on the production. Side one opens with Ice Cold Daydream, a full throttle funk rock vehicle with a convincing vocal and red hot guitar from Shuggie, hut it's the following track that would put him on the map as a songwriter. Strawberry Letter 23. written for his girlfriend who used strawberry scented paper for her letters to him. is one of those gorgeous, uplifting songs with a hook that just wont let go.

Beginning with orchestral bells and acoustic guitar. Shuggie delivers a hippy, trippy love anthem in his most assured vocal performance to date. l:loaring gently on subtle background vocals and a soothing rhythm, the arrangement makes a sudden left hand turn, moving into a psychedelic coda, complete with sleigh bells and and electric guitar rift. In 1977 the Brothers Johnson covered Strawberry Letter 23, their version becoming a US Top 5 single, and selling over a million copies In 1997 Quentin Tarantino brought Shuggie to the attention of a new generation of music tans (albeit anonymously, it must be said) when die film-maker utilized the Brothers Johnson cover of the song on the soundtrack to his stylish crime thriller Jackie Brown.

Shuggie's most famous song is followed by a bluesy, electric slide guitar workour (Sweet Thang), a nod to B.B. King (Me and My Woman) and a romantic R’n’B ballad {Someone's Always Singing). Then comes another complete change of direction. Purple cloaking in at over seven minutes, showcases Shuggie's deep understanding of blues guitar. His passionate soloing, interspersed with harmonica and understated organ and piano, is sensational. The albums finale reveals another instrumental tour de-force.

Freedomm Flight is a sprawling 13-minute foray into free jazz. replete with swirling guitars, wind chimes, organ, electric piano, tenor saxophone and oboe. The final cut on this CD, One Room Country Shack (popularised by Mose Allison) from Kooper Sessions, adds to the experience of revisiting the world of this enormously talented musician, an enigma, who for whatever reason, decided not to record his own music after 1975. Maybe the intetest shown in the re release of these albums and Inspiration Information.
by Billy Pinnell 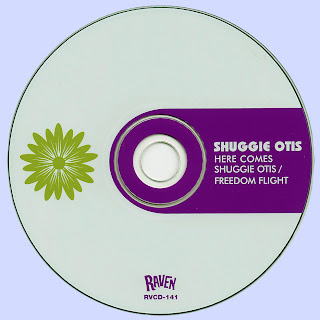 Free Text
Text Host
Posted by Marios at 11:25 AM